Funding, Growth, How I Did It, Legal, Local 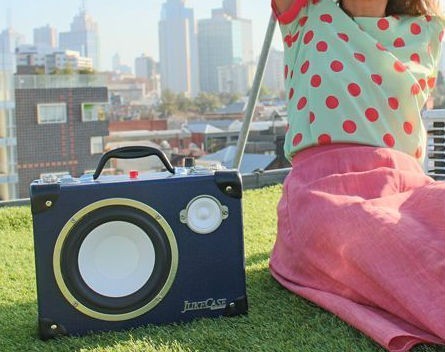 Forget about vinyl – the next big thing among audiophiles could be suitcases reinvented as speakers, with a Melbourne-based startup raising $17,370 for the devices (against a target of $16,000) in just days on Pozible.

Son Valise cofounder Vincent Corneille created the JukeCase – a set of speakers in a repurposed suitcase – after noticing portable MP3 players and smartphones with headphones encouraged people to listen to music in isolation.

He knew he was on to a winner after seeing the look of joy on people’s faces while taking a prototype of the device to the Fitzroy Gardens. Son Valise soon began selling custom-made JukeCases through a shop on Johnstone Street in the inner-Melbourne suburb of Collingwood.

Corneille told Private Media after making the devices for four years it became clear Son Valise needed a standardised version of the device.

“About four years ago we started to make JukeCases. We wanted a portable music player for phones that sounded amazing and nothing else was quite there. So since then, we’ve been upcycling vintage products with vintage hi-fi components,” Corneille says.

“We found we had a lot of interested customers, but we had a high price-range because of the time we took sourcing parts, which put off a lot of customers.”

According to Corneille, it took a year to find the perfect component supplier.

“We designed a standardised range with our brand look and feel, and after a year of sourcing supplies, we added the JukeCase Mini,” he says.

“We needed startup capital for components and will construct them in Australia. So we decided to go down the crowdfunding route to gauge interest. It’s been a great response – we met our target in nine days.”

When it comes to crowdfunded hardware, a perennial risk is that the actual process of manufacturing and shipping products ends up being far more difficult than entrepreneurs anticipate. This can lead to frustrating delays.

“One of the beauties is that we’re standardising production and we’ve already been making these units for quite a while now, although we might step-up production by hiring extra hands,” Corneille says.

“We’ve been quite transparent. By saying we’ll ship them in February 2015, we have time to iron out the bumps.

“People asked if they’d be available at Christmas, and at one point we were looking at the turbo-charge option, but we didn’t want to risk causing someone to miss out on their present.”

Having met the initial target, Corneille is looking at stretch goals such as creating a range of colours, with standardisation also paving the way to mass-distribution.

“We want distribution in Australia and abroad as one of the next steps. We have been talking to distributors in Asia. We did look at distribution for our bespoke product in the past, but that was difficult to manage,” he says.