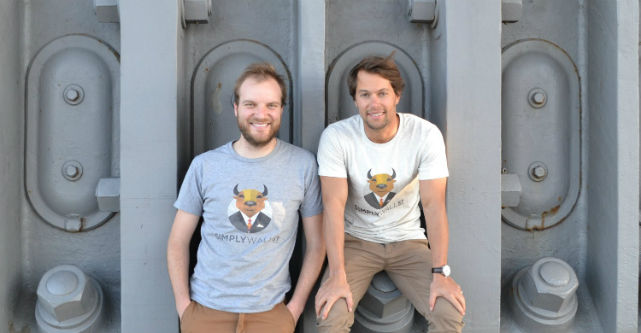 A Sydney fintech startup has acquired its biggest US rival just weeks after it flicked the switch on its revenue model and began to monetise its stock investing visualisation platform.

Simply Wall St has bought American competitor Capp.io for an undisclosed amount of money, adding more than 5000 new users to its already 30,000-strong customer base.

The Sydney startup, founded by Nick van den Berg and Al Bentley, aims to help investors understand the markets through simple visualisations of stocks, while the Atlanta-based company analyses data on US stocks.

Capp.io first caught the eyes of the Aussie founders during their trip to the US late last year, van den Berg says.

“We always pay attention to our competitors out there and are assessing to see what they’re doing,” van den Berg tells StartupSmart.

“We reached out to people doing similar things to us, including Capp.io in New York.

“We caught up with them for some drinks and it was pretty funny just how similar to us the experiences they had gone through and the challenges they faced growing the businesses were.”

When it became clear that their rival was exploring other opportunities, the Simply Wall St co-founders swooped in.

“We stayed in touch, bouncing ideas and seeing what they were doing,” van den Berg says.

“It looked like they were going in a different direction so that was a good opportunity for us.

“There was a lot of back and forth, and they wanted to make sure their users have a good experience out of the transfer. A lot of the stuff was around that, in terms of how we’d look after them and how we would handle that.”

As part of the deal Capp.io will be transferring all of its assets, including its users and IP, to Simply Wall St, and its websites will redirect to the Aussie startup’s site.

Half of Simply Wall St’s users are already based in the US, and this acquisition will help the startup expand to new markets in the country, van den Berg says.

“This strengthens our base over there, and they’ve acquired users from different areas than we have – they have a strong focus on the university, MBA student market and that’s a great channel for us to diversify a little bit,” he says.

“We’re pretty keen to leverage that user base and continue expanding out.”

The move comes only weeks after the fintech moved its premium subscription offering out of beta in its first push towards monetisation, after previously securing a $600,000 funding round last year.

Non-paying users will now be able to access a maximum of six companies and 10 reports monthly, while a premium option worth $75 per year will give users unlimited access to the data.

“We’ve always been designed to have a free version but our more heavy users – the people who really want to consume a lot of data – the premium subscription is obviously the choice for them.

“We’re having a lot of success with organically growing at the moment.”

Although any future acquisition won’t necessarily be as smooth as this one, van den Berg says the startup is always on the hunt for any further deals or partnerships.

“This worked well because we were so aligned in terms of what we were trying to do,” he says.

“Other people might be going at slightly different angles and that would make an acquisition a little harder.

“But we’re always open to opportunities.”