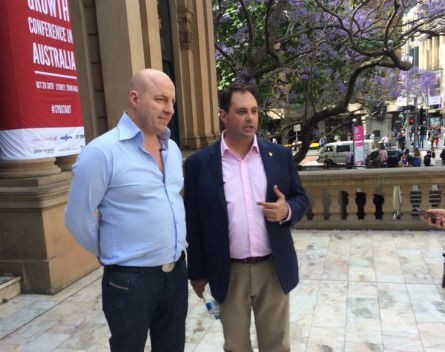 The first dollars spent from the Victorian government’s $60 million startup fund will be used to “steal” SydStart from Sydney.

Victorian Minister for Small Business, Innovation and Trade Philip Dalidakis has announced that the conference, which has been held in Sydney since it was founded in 2009, will move to Melbourne in 2016, and be rebranded as StartCon.

Exclusive footage of Minister Dalidakis announcing SydStart will be moving to Melbourne.

“The conference has done great things for entrepreneurs and startup business owners over the past few years and our vision is to make it even bigger and better next year,” he says.

The announcement is the first in a series which Dalidakis hopes creates a new  “level of excitement” around Melbourne’s startup industry.

With the Queensland government announcing a $40 million co-investment fund last month, Victorian-based startups have are eagerly awaiting what Dalidakis plans to do with the rest of the $60 million startup fund allocated in the 2015-16 budget.

“In a perfect world we would have launched it far earlier,” he says of the startup policy which was delayed after the former Minister for Small Business, Innovation, and Trade Adem Somyurek was stood down from cabinet amid allegations of bullying.

“And as you know we’ve had one or two minor issues in the portfolio space at a political level and I don’t use that to hide behind the fact that we’ve not launched it,” Dalidakis says.

“But when I came in as minister, given I was going to launch it, I wanted to make sure it was going to do everything I wanted it to.”

Dalidakis says he wasn’t in a position to reveal whether or not the Victorian government would be following Queensland’s lead and creating a similar co-investment scheme. However he did say he was impressed by Malaysia’s MAVCAP model.

MAVCAP is a venture capital firm, formed by the Malaysian government to help nurture startups and encourage high-growth tech companies.

“It’s Malaysia’s (government’s) answer to a venture capital fund. And because it’s a sovereign fund, they’re able to leverage off a whole heap of tax breaks,” Dalidakis says.

“That’s what they do on a grand scale.

“What we want to do is create the infrastructure here in Victoria, so that anyone who wants to be able to create a startup, anybody who wants to build their own entrepreneurial tech business can fell as though they can, and are supported to do so.”