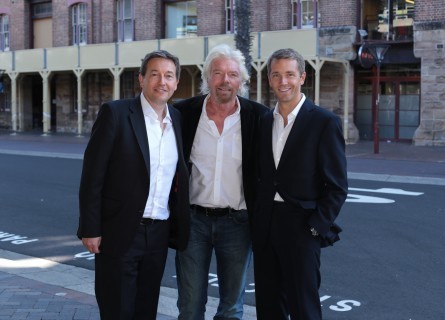 Australian entrepreneur Troy Westley will soon be on his way to Richard Branson’s private island after taking out the top prize at the Talent Unleashed Awards.

The co-founder of medical information startup CareMonkey won the best entrepreneur award in the Asia-Pacific at the ceremony in Sydney on Friday, and will be travelling to Branson’s Necker Island in May next year for a gathering of international leaders.

Getting recognition from the esteemed judges about the effectiveness and potential of CareMonkey is the most exciting part for Westley.

“The fact that they actually looked at what we’ve got and evaluated that, and we were chosen as the winner, that’s such great validation,” he says.

“I’m really proud of that, and its’ really good for our team and our customers to know that they’re on to something good.”

CareMonkey is a user-controlled solution that automates the gathering of medical information, emergency contacts and permission forms from members and employees. Via the smartphone app, this information is tabled and given to authorised carers, such as supervisors, teachers and coaches.

Pitching in front of Richard Branson

Despite pitching to a judging panel that included an entrepreneur worth nearly $5 billion and the co-founder of Apple, Westley says that’s not the part that made him nervous, with only the winners of the five awards given the chance to pitch in front of Branson.

“I was very excited to be on stage, I wasn’t nervous,” he says. “I really wanted to get the opportunity to pitch in front of everyone and I was nervous about whether I’d get that opportunity.”

Westley’s says that although the idea of visiting Branson’s private island is very exciting; it’s all about the opportunities to meet the other entrepreneurs on the trip.

“Going to Branson’s home with a group of other people and being a part of the program, that’s an incredible opportunity,” he says.

“I wasn’t even really thinking about the prize, but I did really want to get the opportunity to position CareMonkey as a leading startup in Australia in front of that crowd. It wasn’t until afterwards when I’d won that it really started to sink in.”

Bring ideas to the fore

The Unleashed Talent awards focus on entrepreneurial ideas in the social and environmental areas, and aim to help them bring creative ideas to the fore.

Richard Earl, the founder of Talent International which puts on the awards, says the entrepreneurs on display are the key to Australia’s future.

“It’s people like them that will be our future business leaders and will ensure Australia is not left behind, but can flourish and lead the way from a business, economic and societal standpoint,” Earl says.

‘Given the high calibre of our entrepreneurs, Australia has the potential to punch well above its weight in the digital revolution, particularly if they are given greater support by the Australian government and corporate Australia.”

The awards were judged by a panel including Branson, Apple co-founder Steve Wozniak and Seek CEO Andrew Bassat.

Other winners on the night included the founder of Clickability Aviva Beecher Kelk, who won best APAC startup and Carl Hartmann, the founder of Temando, who took out the best tech IPO / venture capital raising gong.

Four of the five winners in the Asia-Pacific region were from Australia.

It’s not the first time CareMonkey has taken out an award, with Westley also winning the Best Startup Idea award at last year’s StartupSmart Awards.

Westly says the startup has come a long way in the last 12 months, moving away from just schools and diversifying its clients to a whole range of different industries.

“We want to be the health and safety cousin to any administration system,” he says.

“We have a red hot focus right now on integration with other popular administration systems. We’re not trying to do it all ourselves, we’re trying to work with partners that already have established relationships.”

These partners include the NRL and human edge, as well as companies focusing on New Zealand and the Philippines.

In a testament to the startup’s market penetration, Westley says that a quarter of all Catholic schools in Victoria are using the CareMonkey system.

“It hasn’t been overnight, we’ve been at it for two and a half years now,” he says.

“It takes a while to get that traction, and now the groundswell is really picking up. This just tops it off.”