Tapestry snags $400k government grant – but it’s not done yet 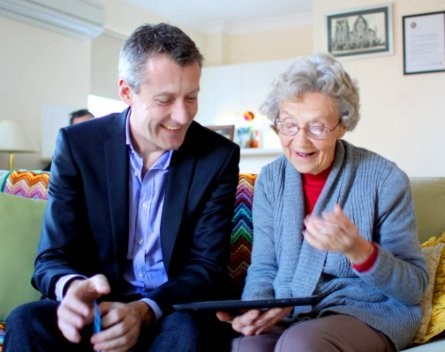 Sydney-based start-up Tapestry is gearing up for a US launch after receiving a $400,000 federal government grant, adding to the $600,000 it raised last year, but is still talking to investors.

Tapestry, founded by Startmate advisor and former Honeywell executive Andrew Dowling, is a tablet application and social platform that helps seniors stay connected to their loved ones.

It allows seniors to take advantage of social media apps in a user-friendly way without worrying about privacy and security.

Then in March, Tapestry was selected as one of 25 start-ups for this year’s Advance Innovation Program, which gives Australian start-ups access to networking opportunities in Silicon Valley.

Prior to its selection for the Advance Innovation Program, Tapestry applied for a Commercialisation Australia grant.

The application was successful, and Tapestry has received a $400,000 Early Stage Commercialisation grant, which, according to Dowling, will be used to accelerate its growth, namely in the United States.

The grant will also be used to extend the Tapestry product to multiple platforms including the iPad and iPhone, and add community-based features.

“We’re in a pretty specialised space in ageing tech. There are not that many companies doing that in Australia,” Dowling told StartupSmart.

“In Australia, the largest retirement village has 500 units. In the US, I visited one with 9500. It’s a totally different scale of organisations that works well with what we’re doing.

“Twenty-five to 30% of our demand is coming from the US even though we’re not doing any marketing over there.”

Dowling says the CA grant is a matched funding grant, “so we have opened a small opportunity for investors to take part and come on board the journey with Tapestry”.

“We’re talking to investors there and here. We’re raising a very small round to match and fully capitalise on the CA grant. It’s not quite the same amount [as the CA grant],” he says.

Dowling says while Tapestry has its eyes firmly fixed on a US launch later this year, there are no plans to relocate the Tapestry team, which consists of six staff.

“Our vision for the company, which is very much in line with the goals of CA and Advance, is to show there is a path to success for Australian companies expanding internationally where they stay in Australia,” Dowling says.

“The talent’s fantastic and there’s a lot of government assistance. From a production and product development perspective, Australia is a great location. We want to show you can be successful.

“Through my involvement in Startmate, I know a lot of those companies move their whole team over there but that’s certainly not our plan.”

Tapestry is, however, looking to hire a US-based team member to assist with the US launch.

“We’re talking to a few people – hiring in the US or hiring here with a move to send someone over,” he says.

According to CA chief executive Doron Ben-Meir, Tapestry is an “innovative Australian start-up with a good idea, solid business plan and talented team”.

“The company’s traction to date is very encouraging and we are optimistic about its future potential,” Ben-Meir said in a statement.