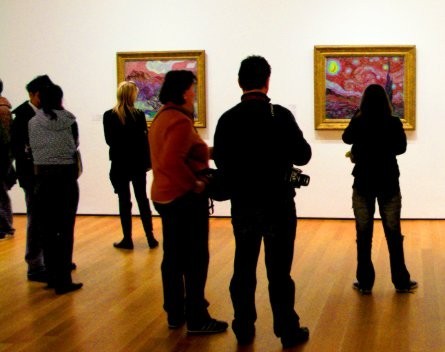 Ortelia, a 3D gallery space mapping technology targeting the cultural heritage industries has launched today, after seven years of development by a tight-knit team backed by the University of Queensland’s commercialisation unit UniQuest.

The team of five began exploring the technology in 2005. They developed a prototype of the software and planned to pitch it to theatres.

Co-founder Lazaros Kastanis told StartupSmart they always intended to commercialise it, albeit for a different target client.

“When we started showing it around, we realised there was more interest in using it in galleries and museums. We realised we had a solid product, and partnered with UniQuest who have held our hand ever since,” Kastanis says.

He adds their client-first approach has continued to this day, and is one of the reasons they’ve been able to successfully commercialise a technology targeting the fiscally constrained cultural heritage.

“We’ve approached every single one of our clients with the understanding we have no idea what they really do, so our first step is always to work with them closely to really understand what they need,” Kastanis says.

Ortelia is launching today in the UQ Art Museum at the University of Queensland, which is the first gallery the team worked with closely.

They’re about to start working with 17 venues after signing a major deal with Museum and Galleries NSW.

Kastanis says other than the perennial start-up issue of finding the funds to keep going, the major hurdle for the Ortelia team of five is navigating the varying attitudes to technology in the museum and gallery industry.

“Many of them have got small budgets but enormous willingness to grab the bull by the horns when it comes to technological innovation,” Kastanis says. “But it varies. Bringing these digital tools into this sector was proved to be challenging. A lot of the people in decision-making positions felt they were all set with their older tools.”

With 18 venues to work with and big plans, the Ortelia team of five is set to grow in the coming months.

“The team is essentially still the same team from when we founded the company. It’ll probably need to grow although the bulk of our development is now done,” Kastanis says. “We’ve got a tight team with flexible interrelationships, and we’re all aware this is one of those classic moments where every overnight success is seven years in the making.”