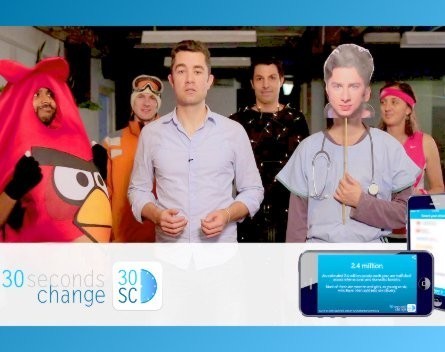 An Australian startup wants to support charities by allowing people to donate 30 seconds each day, as opposed to money.

30 Seconds Change is developing an app which prompts users to watch a single 30 second long advertisement via a daily reminder, and then donates the money raised from advertising to a charity of their choice.

Founder Andrew Wilkinson says given the amount of time people spend on their mobiles, 30 seconds isn’t too much to ask to support a cause.

“Phones are ubiquitous, if people can just find 30 seconds in their day, rather than updating Facebook, surfing the web, playing games, we can make it really easy for people to access advertising, and using that 30 seconds we can turn it into benefit for the wider good,” he says.

Users also have the option of giving 30 Seconds Change their details in order to make their 30 seconds more valuable to advertisers.

Wilkinson stresses they will not be selling the data, which would include things like age, gender and home address.

The app will also allow users to choose which charity the money raised from their 30 second donation supports, and will give users information as to how that money is being spent.

The startup has partnered with a number of charities already, although Wilkinson can’t yet specify exactly who, but says they have at least two in a number of causes, including humanitarian aid, disaster relief, poverty, hunger, gender equality, education, science and medical research, conservation and animal welfare.

Its all-or-nothing Indiegogo campaign launched today with a $US90,000 fundraising goal, the majority of which will go towards engineers and developers and the legal work that is required when working with charities.

Wilkinson says the app is appealing to advertisers because it gives their ads an opportunity to be the user experience, as opposed to interfering with it.

“Ads are often fighting with the content to get your attention,” Wilkinson says.

“Most [advertisers] are really keen to see what audience we can get.

“They love the concept that we are going to have an engaged audience.

“Charities are sometimes forced to spend as much as 48% of their revenue on fund raising activities.

“The 30 Seconds Change platform will provide an efficient, complementary funding stream to our charity partners, while also providing users a new means to support their favourite charities without having to reach into their own pockets.”