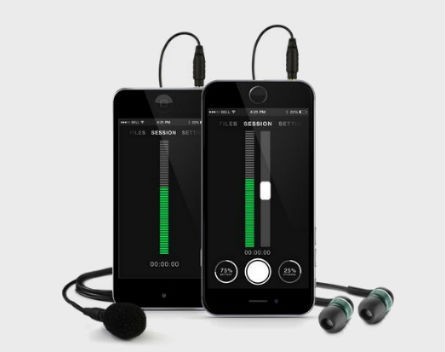 A Sydney-based startup has developed a smartphone-based audio recording system its founders say will do away with expensive or underpowered wireless microphones.

“AirLinc is an app for videographers that uses two iPhones in a setup similar to a wireless microphone. You pair two iPhones over Wi-Fi, using one phone to record your audio and the other to remotely control your audio and check levels,” Thorn says.

“I had the idea when working as a videographer, and I was on a shoot where a wireless mic would have come in handy. But most decent wireless gear is above budget. I thought I could create a similar setup using two iPhones.

“I had the idea two years ago, and got together a team of four a year-and-a-half ago. It’s partly self-funded, but we also got some support through the St George Bank ‘Kick Start Your Startup’ program, as well as a NSW Trade and Investment innovation grant.”

According to Thorn, audio quality produced through the app is comparable to what you would get from a wireless setup.

“The audio quality is quite good on an iPhone. It records at 48 KHz in a raw wave file, which is the industry standard for recording to video. It has a great feature that allows you to record to your transmitter, so you don’t have the lag you can get when you’re recording on the mic on your camcorder,” he says.

As part of the analogue TV shut down, from January 1 this year it became illegal to use old wireless microphones, in-ear monitoring systems, speakers and PA systems that transmit on the 694-820 MHz frequency range in Australia.

According to Thorn, a similar switchover that’s coming up in the US represents a big opportunity for his company.

“There’s a frequency switchover coming up in the US, and a lot of wireless mics and equipment that TV stations use will be made redundant. Because it transmits over Wi-Fi, our product is the solution to that issue,” he says.

The app currently works with Apple iPhone and iPod Touch devices running OS 8.0 and above. However, Thorn hopes to create a version of the app for Android in the not-too-distant future, with the potential for desktop or video applications further down the track.

“We’re definitely keen to create a version for Android, and we’ve had a lot of requests for one. But first, we’ll tackle the iOS market and add a few new features, including having multiple microphones to one receiver.

“We’ve launched the first version, and we’re hoping to get the multi-channel version out within six months.”