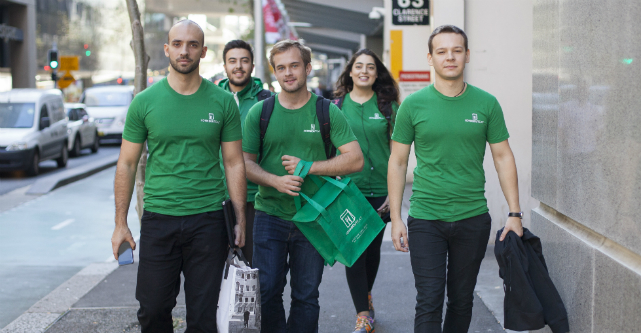 Two Australian startups are among the first companies in the world to utlise Facebook Messenger’s new bot technology, offering one-touch direct food delivery and services through the social network.

Sydney startup HowAboutEat, which offers lunch delivery for workplaces, will become the first food delivery startup in Australia to offer direct orders through Facebook, while tradie services marketplace OneFlare has also created its own Messenger bot.

Messenger bots can provide “anything from automated subscription content to customised communications and live automated messages”, according to Facebook, and are open to any business that wants to tap into Facebook’s 900 million users around the world.

HowAboutEat co-founder Giovanni Ravone says it’s all about diversifying the startup’s offering and making things easy for the users.

“Our main channel is still SMS and we [and our users] love it because of the simplicity,” Ravone tells StartupSmart.

“We want to give more options to users and even communicate in a different way.”

With Facebook attracting 900 million active users each month, Ravone says the bot will amp up opportunities for startups to connect with markets and generate sales.

When HowAboutEat launched last year, the startup offered a platform allowing users to order lunch to work everyday through a simple text message system with a $1 delivery fee.

It has no minimum order amount, giving it a major competitive advantage against other deliver apps, Ravone says.

Through the messaging bot, HowAboutEat will expand its food delivery system from email and SMS to social media, creating more sophisticated and visual means of interacting with users.

“We can send pictures of meals,” Ravone says.

“We can send multiple [food] cards in a message where users can swipe left or right.”

He says they were able to become one of the earliest companies to adopt the tech by keeping their finger on the pulse before Facebook founder Mark Zuckerberg made the announcement.

As soon as it went public, the team contacted Facebook to jump on board.

“There was a rumour a couple of months before the conference and we were waiting for it to come out,” Ravone says.

With the bot set to be a game changer for businesses and startups, Ravone says he expects the new service to boost conversation rates.

But he encourages fellow startups to properly consider if the bot is suitable for their business before adopting it.

“Companies should be careful about what they automate and what not,” he says.

“Our service is very tailored to [this bot] because it’s fairly binary, you either want a meal or not.”

For startups based on more qualitative decisions or multiple interaction options, Ravone says the adoption of the bot could be more complicated.

“The trick is how to make sure the bot really understands the situation and makes the right choice in communicating with customers,” he says.

Services platform OneFlare is also avaible through the chat bot, opening access to its 80,000 local providers through Facebook.

The bot will let OneFlare customers to see all the providers available in their area through Messenger and submit a service request by completing a short form through the bot.

OneFlare already attracts 1.3 million visitors and 45,000 job requests a month, and co-founder Adam Dong says these numbers will skyrocket with the launch of their Facebook Messenger bot.

“We aim to make hiring trade and service experts as simple as possible and ensure that our customers connect with the right expert for their job, whether that is cleaning, gardening, plumbing, removalists or even electrical work,” Dong says.

“Our new Facebook Messenger bot does just that, by bringing our service to a platform our customers regularly use, it couldn’t be more convenient.”