The four reasons this is a magical time for entrepreneurs: Matt Barrie 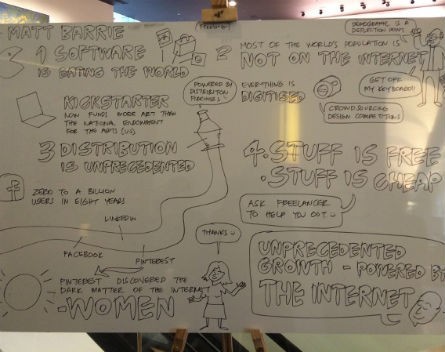 We are living in a “magical time” for entrepreneurs according to Matt Barrie, founder of Freelancer.com, and SmartCompany advisory board member.

Speaking at yesterday’s Creative Innovation Conference in Melbourne, Barrie said we are living in a period of “unprecedented growth” powered by the internet. He outlined four global macro trends that he says have led to “a remarkable period of disruption”.

1.  Software is eating the world

Marc Andreessen, co-founder of Netscape, famously said software is eating the world. “Every business is waking up to realise it’s a software business,” Barrie said.

2.  Most of the world’s population are yet to use the internet

Barrie says there are tremendous opportunities for growth as more and more of the world’s population gets online.

“There are 4 billion people not yet online,” Barrie said. “There as twice as many people on the internet in China as the entire population of the United States.”

Facebook and Google are working hard to enable more and more people to access the internet while simultaneously, Barrie says, every industry is now being digitised.

For digital businesses like Freelancer, this means increasing numbers of clients. “We are in the early stages of replicating a country in software,” he said. “We have a population the size of Belgium”.

Technology adoption speed is increasing as distribution gets faster and faster, according to Barrie.

Facebook went from zero to a billion users in eight years, the Apple iPhone got to 40 million units in two years, and the iPad ramped even faster.

Barrie says it’s cheaper than ever to build a business.

“The great thing about this is everything you need to build a business is free …  if it’s not free it’s virtually free,” Barrie said.

He cites tools such as Google docs, MailChimp and Canva as all providing free or close-to-free business services.

“You can start a business off the back of a credit card,” Barrie said.

For example, RetailMeNot was built with $30 in one weekend, bootstrapped to $30 million in revenue and then sold to WhaleShark for $90 million five years later. Now, RetailMeNot is listed in the United States and has a market capitalisation of several billion dollars. The original founders were clever enough to retain shares.

All these factors mean that businesses can succeed at a quicker pace than ever before, Barrie says.

“It took Apple eight years to reach $1 billion in revenue, Google five years, companies are doing this faster and faster,” he says.