The Hub expands to Sydney, asks start-ups to ‘crowdfund’ launch 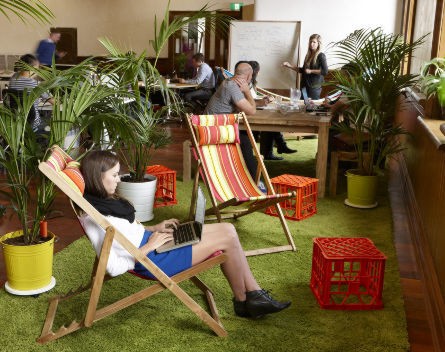 Co-working network The Hub has officially announced it will expand to Sydney, with the shared office provider set to open a “co-working and innovation clubhouse” in Darlinghurst in May.

In the latest in a flurry of co-working launches, The Hub is offering start-ups and solo entrepreneurs the chance to become a founding member of the Sydney space, in a bid to ‘crowdfund’ its launch.

The Hub, a global network of 35 co-working spaces, has had a presence in Melbourne since early 2011, while the South Australian government recently revealed it will stump up $1 million to bring the network to Adelaide.

Since its Melbourne launch, The Hub has played host to more than 750 individuals and small businesses, as well as larger entities such as Kraft and Deloitte. Notable start-ups that use the space, which is fitted with desks, meeting rooms and common areas, include leading crowdfunding platform Pozible and WattElse, a solar power panel provider that has a turnover of $4 million.

The long-mooted Sydney launch of The Hub will see it rub shoulders with the likes of Fishburners and Pollenizer, which last week announced its own foray into the world of shared co-working spaces.

A crowfunding campaign, where start-ups are being offered the chance to become one of The Hub’s first Sydney members, will run until May 31.

The Darlinghurst space, created in conjunction with interior designer Hassell Studio, will be “unparalleled” to its Sydney counterparts, according to The Hub.

“We’ve been co-creating everything from the HUB Sydney community aspirations right through to the physical space since late last year.”

“Sydney is just itching to have its very own HUB and we can’t wait to open our clubhouse.”

The space will feature a place for start-ups to work and mingle, as well as a location for events that focus on areas such as business, design, technology and wellbeing. Members will have access to both the Sydney and Melbourne iterations of The Hub.