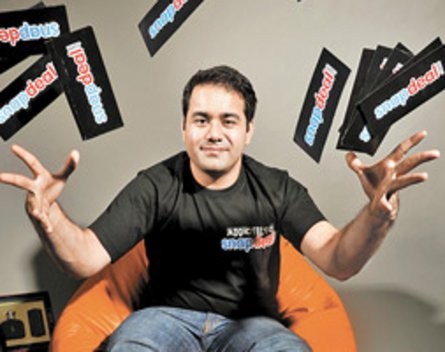 It’s rare for a three-year-old venture to be the subject of a $50 million investment race between global giants eBay and Amazon. Rarer still for that start-up to emerge from India. So how has Snapdeal done it?

According to TechCrunch, Snapdeal, which was founded in Delhi in February 2010, has raised $50 million from a host of investors, headed by eBay.

The cash raise follows a $12 million funding boost in January 2011 and a $40 million investment in September 2011. The business has now raised $102 million in its first three years.

Snapdeal is an online marketplace that offers products across a variety of categories, including electronics, clothing, footwear, books and restaurants.

With 20 million unique users each month, the attraction to eBay, which wants to increase its presence in emerging economies such as India, was clear. Fellow online giant Amazon was reportedly snubbed in favour of eBay’s investment deal.

So how has Snapdeal’s CEO and co-founder Kunal Bahl built a start-up that has got the world’s leading online players beating a path to his door? Here are three decent reasons:

eBay recently revealed it expects 12% of its sales to come from major emerging economies – the so-called BRIC countries – by 2015. In an overall eCommerce market that’s set to hit $300 billion by then, that’s a substantial slice of all global transactions.

By positioning itself as ‘India’s favourite marketplace’, Snapdeal was always going to be a prime target for investors.

Australia’s eCommerce growth is more modest, but is set to hit $37 billion by next year. Indeed, figures released last year show that growth in online sales is starting to pick up again following a recent lull.

With more Australian consumers turning to the internet for their purchases – as the likes of Harvey Norman and David Jones will attest to – there is plenty of potential for new online players to get significant backing.

He wasn’t afraid to scrap his original idea

Realising there was little margin in this business, he changed tack to offering restaurant deal vouchers in a tearable booklet form.

The lesson is clear – if you have tested out your initial idea and it comes up short, don’t be afraid to revamp it. Bahl went through at least half a dozen changes before he struck gold with Snapdeal.

Bahl says that Snapdeal’s ability to “move very, very fast” is a key advantage over its competitors.

The company has grown rapidly in terms of workforce, prompting Bahl to hire someone whose sole job is to oversee company culture and ensure the smooth integration of newcomers.

This expansion can lead to growing pains, but the upside is that Snapdeal has remained nimble and able to outmanoeuvre its larger counterparts.

Amit Khanna, who heads the product division, told Kalaari Capital: “What I like the most is the speed at which we execute or implement anything.”

“Whatever you think, you start it small and then you execute in a bigger platform. Most of the companies are not able to validate if their idea will work. Here we experiment at a small level and implement it on a larger scale. That’s the advantage you have if you are at Snapdeal.”