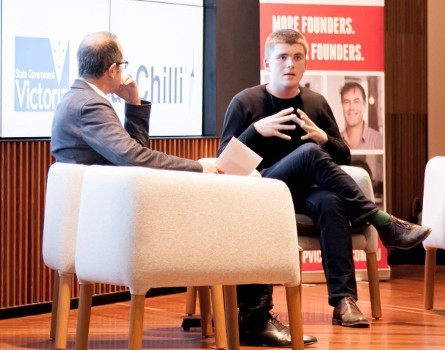 Here are our top seven pieces of advice Collison offered startups on a range of topics.

“You want to have a very high level of trust and the ability to work together because there’s so much for you to do, there isn’t time to sort out other stuff. Every day there’s this big lump of work and you both attack it and it works great, but as the company grows in size you really have to start splitting the responsibility.”

Collison recalled a chat he had with an investor while searching for funding for Stripe during which the investor highlighted appointing co-CEOs doesn’t work.

“He tells this to people anytime they come in and say they are co-CEOs,” Collison says.

“He says ‘ok just to clarify here, you’re trying to be co-CEOs? So you’re making everything confusing for all your employees today and all the employees you’ll ever hire. Who will get decisions from the both of you and they’ll never quite understand where they stand, just so you guys don’t have an awkward conversation right now?”

“We hired fairly slowly throughout Stripe.

“We’ve always been willing to simply not hire for a role and leave it unfilled rather than settle and be willing to compromise. And I think it’s been really important if you’re looking at it from a really long term perspective.

“When you’re hiring a person you’re not just hiring them, you’re hiring the next ten people after them. I remember when we were hiring a graphic designer, it took a year to find the right person and so for that intervening year Stripe was just really ugly.

“But again we preferred to be ugly for that year and have the right designer over the next many years, than settle immediately. They’re going to affect the quality or the calibre of people you recruit after that. You’re not hiring on a role by role basis, you’re gradually corralling people into this nebulous sphere.

“Your ability to directly influence hires actually decreases as the group grows in size so you better hope you’re doing a good job with those early hires.

4. The future of e-commerce?

“The way we think about it is, if we’re just getting people to move over from a competitor to Stripe, stirring up the existing pot but not actually changing things, that’s not actually that interesting.

“The global e-commerce market, coming up with these figures always involves a heavy dose of making up numbers, but people generally put it at around a trillion dollars, and it sounds like a big figure, but is it actually that big?

“Around two per cent of consumer spending globally happens online right now. You can kind of argue where that’s going to end up, and if you base it on the time you all spend online on our phones, we’re going to end up with a very significant spend of our portion online.”

5. How to build a successful global business?

“If you think of any global business that has been very successful, you quickly find they have a pretty clear idea about their core competency.

“I use this app if I need to travel, and I’m not using Airbnb, I’ll open Hotel Tonight and book the first thing available, they’re heavily discounted, but I realised my loyalty has shifted, it’s not with any particular hotel chain, it’s now with the app itself and staying in Hotel Tonight.

“If you’re a hotel that’s terrible. You’ve spend decades building up this brand. A lot of these companies have backed themselves into these corners.”

6. Do you need to go to Silicon Valley to start a startup?

“In general I think people see Silicon Valley as this place that has a monopoly on tech innovation and I think there’s actually some pretty good reason to believe it’s becoming increasingly spread out.

“You’re getting to a point where a team of 50 or a team 100 talented people can completely disrupt a market.

“I think the jury is still out a bit on how much the availability of capital affects things, because certainly there are plenty of problems where you do need outside capital for the tech to grow quickly, otherwise it can be very slow.”

7. Is Silicon Valley encouraging the best and brightest of our generation to only solve problems felt by the middle class?

“I think it’s actually a very good thing to be worried about. We solve problems for people like us, and so we come from a very privileged background so we’re going to solve problems of people from our background and there’s a large spate of the population that you ignore.

“People talk about WhatsApp being acquired by Facebook for $19 billion dollars, but I think there’s kind a bit of an availability bias here. You only hear about the most egregious examples right. You hear about Yo! getting funding, but you don’t hear about Theranos in Silicon Valley which does blood diagnostics on your iPhone and they’ve raised $400 million. No one talks about it because it’s more fun to talk about Yo!

“You look at where WhatsApp was most popular, it was in reasonably poorer countries like India where the cell phone providers who previously were charging these extortionist rates. [WhatsApp] came along and used the fact that people had smartphones to completely eliminate $100 million of carrier revenue from SMS.”