“This is just the beginning”: Startups welcome Victoria’s $60 million push to be innovation leader 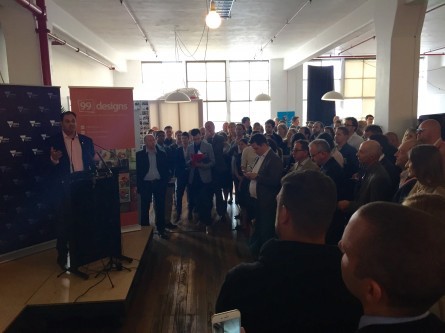 The launch of Victoria’s $60 million innovation fund is “just the beginning,” as the state government says it is now “walking the walk” on startups.

The creation of the fund was announced nearly a year ago by the Andrews Labor government, and now details of how it’ll be deployed have finally been revealed.

The fund is named LaunchVic and will be an independent advisory board at “arms-length” from the government, working to “accelerate startups, drive new ideas and create jobs”.

“The creation of LaunchVic is the fruition of that election commitment,” Dalidakis tells StartupSmart.

“This is just the beginning.

“We want to build on this and lock ourselves in as the number one startup state in Australia.”

At arms-length from government

“This is not the government telling the sector how it’s going to be,” Pradeep said.

“This is an agency that’ll be learning, partnering and facilitating those outcomes that really matter to all of you.

“It will not be a bureaucracy getting in your way. Our mission is to help you do what you are already with style better, faster and with more connections and greater access.”

The Victorian startup community has welcome the news that the $60 million fund will be deployed by a body independent to the government, with MoneyPlace founder Stuart Stoyan saying this is a “genius” initiative.

“It ensures funding will go directly to startups and not get lost in red tape,” Stoyan says.

“Coordinated government support for the sector has been a key demand and this places Victoria incredibly well from a regional perspective to be able to launch great, innovative companies into Australia and give them a leg-up into the global marketplace.”

Fintech Melbourne founder Andrew Lai says the agency’s ability to provide quick and efficient support is crucial to its impact on the ecosystem.

“I really like how LaunchVic is a separate entity and hope that it will cut government bureaucracy because the startup community do need immediate support,” Lai says.

“It’s a great initiative and we think the government and the advisory boards know that to support innovation, they need to facilitate rather than dictate,” Jankie says.

“We’ve been at the front of the pack in promoting Victoria as Australia’s startup capital.

“The talent we have grown in Victoria has been outpacing other states for some time now, and this major initiative will help cement that.

“The Andrews government has been great talkers, and have now put their money where their mouth is to become great supporters.”

Despite the popularity of Queensland’s recent announcement of a $40 million startup co-investment fund, Dalidakis says this is not how any of the $60 million will be spent.

“At this stage we’re not looking at doing co-investments into companies directly,” he says.

“We think it’s important to grow the ecosystem and that’ll get a much greater return-on-investment than just trying to pick a winner.

“That’s not to denigrate what Queensland is doing – it may be time to do that down the track.”

He also says it’s crucial that the government is actually customers of the local startups in addition to funding them.

“It’s one thing to dish out money into the ecosystem or in research grants. It’s another thing to really walk the walk,” Dalidakis says.

“The government has huge ability to support the ecosystem through procurement.”

This process has already begun, with the LaunchVic turning to local graphic design startup 99designs to help design its logo.

“We’re supporting a company that was set up here that’s gone global and are leaders in their field,” he says.

“We’re putting our money where our mouth is.

With LaunchVic now having $60 million in funding at its disposals, the state’s startup community is already writing its wish-list.

For Lai and Stoyan, it’s important that the body’s commitment to improving infrastructure is put towards the creation of a dedicated fintech hub.

“I’d like to hear more about specific cut-outs for fintech given that the industry is the biggest growth driver in the state,” Lai says.

“I’ve got my fingers crossed that this helps attract more investments and hubs.”

For Jankie, it’s about fostering and nurturing startups and founders from the very beginning.

“We hope they start with support for the co-working spaces to start the incubation process,” he says.

“The biggest single step for someone getting into a startup is making the move from a job to going out alone. If the government can help with that first transition, rivers of bits and bytes will follow.”

For LaunchVic’s CEO, it’s all about bringing the community together and providing assistance where it’s needed, for the benefit of all.

“It’s about our ecosystem being more than the sum of its excellent parts and striving towards our economic future together.

“If we want to be different we have to do it differently.”