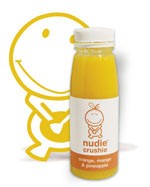 A brief glance at Tim Pethick’s early career suggests a character entirely at home within the soft furnishings and expense accounts of corporate Australia. MBA from Deakin University. Chartered accountant. Marketing director at MSN. GM of Village Roadshow. CEO of Encyclopedia Britannica in the UK.

This initial impression sits uncomfortably with the man himself. Pethick, who ultimately founded Nudie, is happy to state: “It’s clear that I’m a square peg in a round hole in a corporate environment. I find that it’s rule-bound and bureaucratic processes can overtake delivery of outcomes.”

This dislike of conformity was to lay the fuse in Pethick to create Nudie, the natural fruit smoothie brand that made $12 million in sales in its first full year. But it was also to contribute to his exit from the business, barely three years after he transferred the flavours he created in his kitchen’s blender onto the shelves of Australia’s supermarkets.

The actual ignition of the Nudie fuse actually took place in the unlikely setting of Chicago in 1997. Pethick, who was living in the US city at the time, took a liking to a product called Fantasia, which was simple, crushed fruit in a bottle.

It struck Pethick that this natural product provided a clear point of difference from the overly-processed big juice brands that surrounded it in the supermarket chiller.

Convinced that a similar concept could work in Australia, Pethick decided to start Nudie in 2002, giving up his position as CEO of BTLookSmart where, he recalls, he was spending “60% of my time managing the board rather than the business.”

Pethick was also driven by a desire to do something away from the online world, jaded following the dotcom crash.

“I was sick of bits and bytes – I wanted something I could touch and pick up,” he says. “I was jaundiced by the web industry.”

With strong links to the venture capital world, Pethick reasoned that it would be fairly simple to get the funding needed to start the manufacture and distribution of his natural smoothie products. The reality was a little different.

“I did the rounds and got the same story – ‘You’re mad. You know nothing about the food and beverage market. There’s no space for start-ups in this sector.’’

“I had to break my own rule and provide my own money for the venture. I put in $150,000 but it then required a lot more in external capital.”

Pethick’s network may have been initially reticent to put its money forward but he found help in other areas. A friend of a friend was able to source him a ‘fruit broker’ while another friend handled sales, as well as the vital task of van driving. A third friend, James Ajaka, was brought on board to oversee marketing.

With a factory sourced, Pethick had the bare bones of his business, but no brand. He hired ad agency Jack Watts Currie to come up with a name and sifted through 250 different ideas before settling on Nudie.

“The initial names were things such as Eden, Bliss and Real,” he explains. “We wanted a fresh, natural name. We thought about Naked, but that was in the US.”

“We then came up with Nude and took it to JWC. They said ‘this is Australia – we stick an ‘ie’ on the end of everything. It should be Nudie.’

“I thought it was childish, but the domain name was free and there was no trademark on it. I slept on the idea and decided it could work.”

Pethick hand-drew a character to go on the Nudie bottles – a piece of fruit with a head on it. JWC adapted it to the large-headed figure now familiar on the product’s bottles.

Nudie’s distribution was initially focused on the eastern suburbs of Sydney, with limited success. The product was smaller than the average juice bottle and priced much higher, at $3.20. Some were critical of the high price point, but Pethick, ultimately vindicated, remains unrepentant.

“It’s more expensive to use real fruit rather than orange juice concentrate,” he says. “Also, people are prepared to pay $3.50 for a cup of coffee. In my view, consumers always buy quality. There is a mis-conception that value is just about price. Price is only one element of value.”

Pethick told retailers that they could make more profit with more bottles fitting on valuable shelf space than rivals’ offerings.

Facing a mixed reaction to his proposals, he then took to giving products away in the street to passers-by. The tactic spawned a consumer fan base for Nudie that ultimately propelled it into the nation’s supermarkets.

“I told people that if they really liked the product they should ask their local shops to stock it,” he says. “Hundreds of retail stores contacted us. By empowering consumers, we got it stocked everywhere.”

Facing down the supermarkets

Initially aimed at affluent women aged 18 to 35, the overwhelmingly positive feedback convinced Pethick that there was a broader market for Nudie. He attempted to get his product stocked in the supermarkets, only to be rebuffed.

“Woolworths said ‘forget it’ while Coles said it needed to be a premium product, have a black label with an orange on it and it can’t be called Nudie because it’ll offend little old ladies,” he recalls.

Undaunted, Pethick was to return to Coles five months later with sales figures that demonstrated that Nudie was a winner.

Nudie benefitted from a quirk that saw it mistakenly placed on the shelves of a Coles Xpress store in Wynyard, Sydney. Other vendors saw that Nudie was now being stocked and soon the product was in 12 Coles Xpress stores, with Pethick providing stock even though his company didn’t make any money from the sales as they weren’t officially listed as a Coles product.

“I met with a Coles buyer who said I had been very naughty,” he says. “I went armed with the sales information and that convinced him to stock Nudie.”

Nudie began to take a foothold and competitors tried to muscle in on its territory. However, the grassroots consumer army gathered by Nudie, acquired despite, or perhaps because of, no advertising, rejected the imitators and the brand continued its onward march.

“Consumers respect leaders, not followers,” says Pethick. “Nudie was a nice and appealing brand that was very real. For the first 12 months, when people called the company, I answered the phone. I replied to all the emails. It was funny and cheeky and people liked that.”

Nudie’s bucolic existence was to be forever scarred by an arson attack on its warehouse in May 2004. The fire devastated the premises, which was specifically designed for Nudie’s production.

No other existing factory could meet Nudie’s requirements so the company, mindful that shelf space could only be held for a short period while production halted, had to quickly build from scratch, relocating to Adelaide.

The fire was to prove the catalyst for a series of events that led to Pethick’s departure. Prior to the arson attack, Pethick was in talks with external investors, who promptly walked away after deeming that the fire had wrecked Nudie as a business.

Pethick, in dire need of rapid investment, managed to lure them back to the negotiating table by offering a far more favourable deal. It was to be his undoing.

The new investors, now installed on Nudie’s board, implemented the kind of corporate culture that Pethick had gladly abandoned several years previously.

“They brought a conventional approach with them, rather than an unconventional one,” he says. “We were about to launch a cashew fruit product and they asked what market research I’d done. I hadn’t done any – I just made up the flavours in my kitchen and if my friends and I liked it, we went with it.”

“They said ‘oh no, you need focus groups.’ It all harked back to my corporate days. The fire robbed me of choice. It descended to brawls in board meetings and they had the weight of numbers. I was pushed out.”

“It was an extraordinarily difficult time. I built the business from the ground up and it was a bit like a child. It’s hard when you have your baby stolen from you and it’s mistreated.”

“I’ve watched it closely since I left – it’s had two ACCC actions against it, sales have declined and there’s no innovation. It’s very sad for the business.”

Pethick admits that he threw himself into new start-ups “on the rebound” from Nudie. He launched Max Super, a superannuation brand aimed at 25 to 40-year-olds, and potato chip brand Salty Sally. In all, he was involved in six start-ups between 2005 and 2008.

“I’m focused on what’s ahead of me now, not what’s behind me,” he insists.

What are Tim Pethick’s top tips for budding entrepreneurs?

Be different – “Do things differently. Make sure you find a different way to engage people. The more voices you listen to, the more you will trend to the normal. You have to deviate away from that.”

Pick your partners carefully – “To do business with someone, I have to like them, trust them and respect them. With hindsight, I didn’t have any of those with the partners at Nudie.”