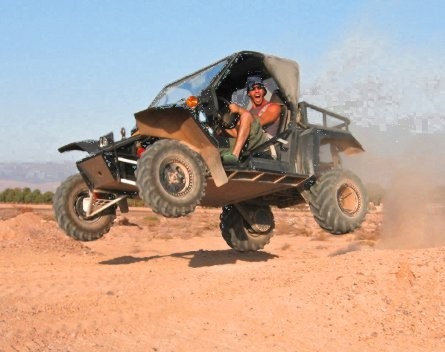 Melbourne-based vehicle manufacturing start-up Tomcar is midway through the production of its first run of all-terrain vehicles, all 100 of which have already been sold.

Prior to going into production this year, the Tomcar team had been working on the start-up for years.

“We started production earlier this year after a seven-year uphill struggle and we finally have a line. We’ve just pumped our 25th car and are looking to double that in a few months,” co-founder and chief executive David Brim told StartupSmart.

Tomcar is run from three laptops, with the manufacturing outsourced to automotive component maker MtM for three years. Based in the Melbourne suburb of Oakleigh South, MtM also works with Mazda, Jaguar, and Holden.

David’s father and co-founder, Joe, was searching the internet for a retirement project when he came across the first iteration of the Tomcar, which was designed by the Israeli military.

After connecting with the Israeli defence force, Joe purchased the contract for design, manufacturing and distribution in Australia and surrounding region.

The Brim family, including the third co-founder, David’s brother Michael, moved to Australia from London to launch the company just over seven years ago.

“It was going to be a small project of maybe a few hundred recreational vehicles a year. But it’s a bigger product and vision now,” Brim says. “We’ll be scaling up to a 5000 vehicle a year project.”

The key markets will be military, mining, agriculture and ecotourism.

“We saw huge potential for it in Australia and the more people we showed the car, the more applications it had,” Brim says.

Given the vehicle’s origins, the primary market will be defence. Brim says the Australian Defence Force is excited about it, and they’re in negotiations with the New Zealand, Indonesian and Papua New Guinean armies.

The vehicles are off road, all-terrain vehicles with a low centre of gravity (54 centimetres). The four independent suspensions means the car has an industry leading ground clearance of over 38 centimetres.

“With the high ground clearance in a vehicle with the same extremely low centre of gravity as a Porsche, what we’ve got here are two statistics that don’t usually sit side by side,” Brim says.

Ex-Ferrari and Lotus engineer Darran Sexton joined the team a few years ago. They overhauled the vehicle so it was more like a car than an all-terrain vehicle.

“It took us just under six years to take the car from the drawing board prototype concept from Israel and convert it into a production-ready vehicle to sell in the Australian marketplace,” Brim says. “We straight away saw the possibilities. The market was crying out for a machine like this, and we improved it.”

Brim says they focused on improving the braking and cooling systems, and customising the design by using automotive-size electrical systems, engines and standard braking systems, as well as making the car seats and wheels adjustable.

“It can go over 45 degrees on a side slope before it rolls over, so it’s extremely hard to roll it over, but if it does, the safety cell is incredibly tough and robust and protects the occupants,” Brim says, adding the car’s frame is welded as one unit, from over 300 pieces of steel.

Tomcar vehicles are sold directly online or through a range of strategic partners in each industry vertical, such as Brisbane-based company which adds their equipment to the vehicle and on sell it to fire-fighting services.

“We’re not going to set up a cumbersome out-dated dealer network where our success is reliant on external forces that we have no control over,” Brim says, adding another task that took years was establishing the support systems and back-end.

“You can’t just build a new kind of car and sell them. We needed to create owner manuals, warranty schedules, parts and management systems. The documentation was immense,” Brim says.

Despite the government’s announcement of manufacturing as a priority innovation precinct and the spate of cash injections into car manufacturing, co-founder David Brim told StartupSmart the government hasn’t been interested in supporting them.

“We hear all about the death of the car industry in Australia. We’re starting one. We’ve approached the government for funding a few times but we’ve had no luck,” Brim says. “Because we don’t make anything hands-on ourselves, we’re not a car company in the government’s eyes.”

Brim says the government’s focus on one limited function of manufacturing was holding innovative developments that could save the local car industry back.

“We outsource for a reason. There is an array of companies out there who are struggling and very good at what they do, so why would we re-create the wheel? This allows us to stay small, nimble and innovative in a space that is suffering in Australia,” Brim says.

He adds the wider car industry is broken, and they don’t need the funds to survive.

“The problem with car companies now is these businesses rely on government handouts of hundreds of millions of dollars, so that’s a flawed business at its heart. We’re a strong, profitable business, so we don’t need any government money, but it would speed up our rollout and success, which will flow to other car part manufacturers we work with,” Brim says.