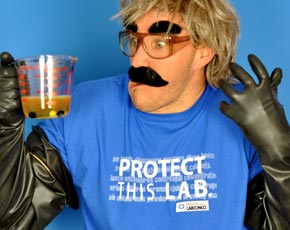 Last week’s $30 million investment in the Cheezburger Network will have raised the eyebrows of the casual observer.

After all, how can a business behind something as banal as LOLcats or the FAIL series of sites attract such a huge investment?

The answer, of course, lies in the fact that Cheezburger’s sites are able to capture 16.5 million guffawing users each month. The idea may seem throwaway and silly, but the core numbers of the business stack up.

Cheezburger isn’t the only unlikely success story in the business world. Far from it. There are plenty of seemingly outlandish ideas that have formed the basis of successful businesses. Here are the top 10.

Jason Sandler is set to make $500,000 this year, merely for wearing t-shirts. Sandler isn’t a celebrity, model or designer – he simply wears t-shirts emblazoned with the logos of companies.

Every day, Sandler wears a different t-shirt with a different company logo. The businesses pay him for this privilege. In return, Sandler attempts to plaster himself across as much of the internet as possible – think Flickr, Twitter, Facebook and YouTube – to provide his clients with online exposure.

The success of the business means that Sandler was able to charge $5 on January 1 this year, with the price rising in $5 increments each day.

Making recycled cardboard hangers appears to be a fairly simple idea that you imagine someone would’ve cottoned onto a long time ago.

A trio of Australian entrepreneurs discovered that, in fact, no business had entered this area and so Green Hangers was born.

Retailing at $5.95 for a pack of 10, the company has recorded booming sales and has found retail and contract suppliers such as Bunnings, Quiksilver and several hotels and drycleaners.

Global domination is being eyed by Green Hangers. Logistics remain in Australia while manufacturing has been outsourced to China.

An idea that stemmed from Lindsay Phillips’ high school art class when she was 16-years-old netted her $30 million in revenue last year.

Phillips was decorating porcelain sandals for a class project, with the activity quickly turning into a personal hobby. One day, a friend was so excited by the colourful shoes that she attempted to put them on.

Phillips realised there was an opportunity for sandals with interchangeable, decorative Velcro straps, giving the outside world the impression that you own multiple pairs of colourful sandals. Each pair sells for $35. Wisely, Phillips, now 23, patented the idea. She plans to expand into UK and Europe.

Marketers struggle to get consumers to change their behaviour from buying one brand of chewing gum to another, so you would imagine that meddling in people’s lavatorial habits would prove futile.

Such a challenge didn’t deter UK entrepreneur Sam Fountain, who decided that the act of female urination was the basis for a business.

While backpacking in 1999, she came up with the idea for the SheWee, a device that enables women to urinate while standing up, much like men. Following her degree, she set the business up in 2003 and the company has since expanded to the US, no doubt hearing plenty of stifled sniggers at dinner parties along the way.

For anyone who is lacking tedium and the faint whiff of cheese in their lives, a romantic novel can often be the perfect remedy.

Seizing on this rather tired genre, Katie Olver started up U Star Novels in 2006. The novels run along certain themes – titles include ‘Fever in France’ and ‘Indecent in Italy’ – but each book is personalised by the consumer.

The user inputs their details – standard passport application questions such as name, age, height and nipple colour – and these titbits are weaved within each steamy story.

Somehow, there is a market for this. U Star Novels has experienced impressive sales in the UK, US and Australia.