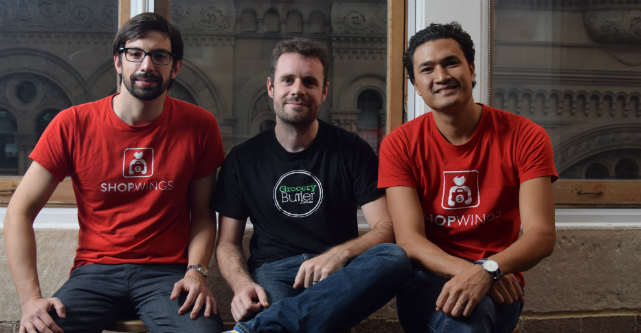 Two Australian startups have merged their operations in an attempt to conquer the online delivery market across the country.

ShopWings and Grocery Butler have joined forces, merging into a single entity that will initially service Sydney, Melbourne and Brisbane and with a combined client base of more than 15,000.

“It’s something we’ve been thinking about for a while and now is the right timing for both companies,” Dupont tells StartupSmart.

“We both have a lot of similarities and it’s a very interesting match. We’ve got very good technology and a lot of experience in building very good tools.

“On the other side, Grocery Butler is very strong in terms of growth and a very good lean approach. They have a very different type of operation and we learn a lot from them in the business we do.”

No money was exchanged as part of the deal and both startups will now operate on the ShopWings platform, with Guillaume Ang becoming the CEO of the combined entity.

Both Dupont and Grocery Butler CEO Michael Parthenides will still serve on the board of directors.

ShopWings will also be supported by Australia’s biggest accelerator BlueChilli and will remain a part of the Asia Pacific Internet Group.

The merger will allow the company to have a strong presence across three major cities, and prepare for further expansion, Dupont says.

“It’s a very complimentary match and from a geographical footprint it makes good sense to combine that,” he says.

“We’re bigger in Sydney and Grocery Butler is bigger in Melbourne and Brisbane.”

ShopWings offers a home delivery service for groceries and other retailers, including IKEA, with a personal shopper picking up the items.

“The offering will be very similar,” he says.

“We’ll keep having IKEA delivery and ALDI and Coles delivery, but we’ll be merging client bases.”

Learning from the competition

The strategic move comes as the delivery space in Australia becomes increasingly competitive and saturated.

Despite a wealth of other competitors, Dupont says ShopWings stands out from the pack.

“In terms of one core competitor there isn’t a similar service offering fast, same-day delivery from existing supermarkets,” he says.

“There are grocery deliveries like Coles Online and Woolies Online, but in terms of our offering we are unique in terms of speed and same-day delivery.

“We can deliver from ALDI, Coles, ALDI and Coles at the same time, and IKEA. That’s very unique.”

Dupont says the most important lesson from this process for other founders and entrepreneurs is to not simply disregard competing companies as mortal enemies.

“This step taught me that it’s always interesting to think more about how you can be successful rather than focusing on beating your competitiors,” he says.

“You can always lose energy looking at other companies but actually down the line you can just work with them. That’s a very good learning.

“It’s something that’s always good to keep in mind when building a business – competition is good and you could end up merging together.”