Uber and Gojek just the start of disruptive innovation in Indonesia 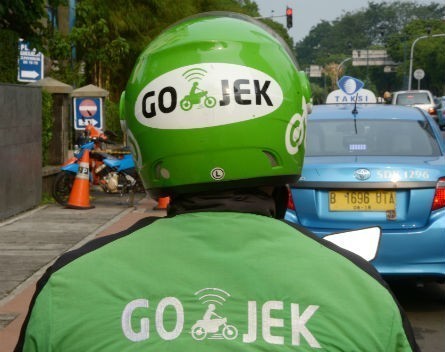 People in Indonesia’s capital Jakarta, where public transport is poor and the traffic horribly congested, have eagerly welcomed ride-hailing apps such as Uber for car rides and Gojek for motorcycle rides.

San Francisco-based Uber entered Indonesia in August last year as part of its expansion across the Asia-Pacific region. Gojek, a local company that has been operating since 2011, has an average of 200 new drivers per month.

But these apps that connect drivers to passengers are creating competition for established taxis and corner-street ojek (informal motorcycle taxis). And they are not happy.

The Organisation of Land Transportation Owners (Organda) has questioned the legality of Uber cars operating in Jakarta. Last month, Jakarta police confiscated five Uber cars following the complaint. They have since been returned.

Tensions between local ojek and Gojek drivers are also simmering. Ojek drivers have reportedly stopped Gojek drivers, who wear flashy green jackets and helmets, from picking up their passengers.

Uber and Gojek are basically referral services. The apps work with Android, iOS and Windows phones. The GPS capabilities of smartphones allow both drivers and passengers know each other’s location. This removes the question of when the ride will arrive.

The competition from these new technologies is disrupting the market for traditional players. Given the relatively low price and ease of access for Uber and Gojek, these apps are entering a head-to-head war with established operators.

Conflicts arise since these “modern operators” are creating competition for “conventional operators” within the same market. This does not apply for relatively similar apps such as GrabTaxi, which utilises existing taxis.

During the advent of the internet in the 1990s, Harvard Business School professor Clayton Christensen foresaw the possibilities for market disruption caused by new technologies.

In 2013, Christensen observed the collapse of “sustaining” companies: those that are not innovating using new technologies, but only improving their existing services. Examples of these sustaining firms are companies that produce giant mainframe computers and those that manage fixed line telephony. These companies charge the highest prices to their most demanding and sophisticated customers to achieve the greatest profits.

According to Christensen, these great firms are collapsing since they are reluctant in opening the door towards “disruptive innovations”.

Disruptive innovation allows a new population of consumers to access products or services that were historically only accessible to rich consumers.

The term “disruptive innovation” is rooted in the “creative destruction” theory by economist Joseph Schumpeter. The theory describes a:

… process of industrial mutation that incessantly revolutionises the economic structure from within, incessantly destroying the old one, incessantly creating a new one.

Gojek and Uber are not the typical disruptive technologies hailed by Christensen. They are not creating new markets and value chains. But these apps exist because the disruptive trend of over-the-top services, where businesses provide services over the internet, bypasses traditional distribution.

Making the best of technological disruptions

Indonesia’s task in the coming years is to find a way to elegantly monetise this wave of disruptive technologies.

On the other hand, technological disruption can cause losses of potential revenue in the short term due to business shifting. The telecommunications industry is predicted to lose a total of US$386 billion between 2012 and 2018 due to over-the-top messaging services such as Skype, WhatsApp and other third-party internet voice applications.

Governments should catch the wave of technological disruption. Regulation holds an essential role in harnessing disruptive innovations. However, regulation could also preclude quality-enhancing, lower-cost innovations from entering the market.

Flexible regulations should be there to cope with this trend. Indonesia’s regulations are currently too rigid to be able to adapt to the entrance of disruptive technologies.

For example, taxi services in Jakarta are obliged to have a licence and pay taxes to the government. The rate/tariff for taxis in Indonesia is highly regulated. The tariffs are determined by transportation ministry and it applies to all public transportation company without any exception.

Uber considers its business model as different to the traditional taxi service. This rigid regulation is creating a barrier for new service providers such as Uber and Gojek.

Rigid regulation will only create technological anarchy that is “a catalyst for change that creates a new and different world”, to quote Jeff Garzik, one of Bitcoin’s most prolific developers. In other words, disruptive innovations will always outsmart regulators eventually.

So the choice is, are you with us or against us? History tells us disruption always wins.

Fithra Faisal is Research and Community Engagement Manager at Faculty of Economics at University of Indonesia.