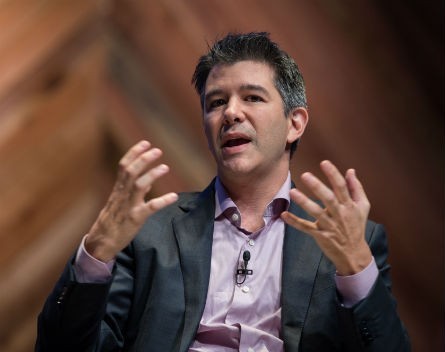 Uber founder Travis Kalanick wants every car to be on the ride-sharing platform.

Speaking with Salesforce founder, chairman and CEO Marc Benioff at Salesforce’s Dreamforce conference overnight, Kalanick said the reason he founded Uber, was to make transportation as reliable as running water. The taxi industry was broken, he says, for both passengers and drivers.

“(They) pay $US140 a day to rent the car. Over a year that taxi driver is spending $US40,000 renting that taxi. That should be a Bentley or something. But it’s not.There’s a limited amount of taxis on that road so you’re just paying somebody that owns the licence.

“For drivers (Uber) can be, if they used to be a taxi driver, a way to make a much better living than in a taxi, and a much more flexible way to make a living.”

That might be the case now, but with self-driving cars on the horizon, Uber could play a part in wiping out the taxi industry altogether.

“I mean Google got started on driverless (cars) in about 2006 or 2007. At this point you’ve got Google, Tesla, other folks, a lot of folks we read about working on these kinds of things. There’s a lot of promise in it,” Kalanick says.

“I think something like 30,000 people in the US alone are dying in car accidents every year. What if that was zero.”

It’s the potential to save lives, reduce congestion and pollution that Kalanick highlights as the biggest benefits  of self-driving cars. He also says that if done on a big enough scale it could give the disadvantaged better access to transport.

Benioff pushed Kalanick on the “dark side” of robotics, artificial intelligence and self-driving cars, alluding to the impact it would have on those who might lose their jobs.

Kalanick says he doesn’t believe in the light or dark characterisation but that as a technology company, Uber must embrace change.

“With Uber you can see it’s a little bit disruptive to our model, because we’re a two-sided marketplace and do pretty well as we are today. But as a technology company you also have to say, well am I going to be part of the future, or am I going to resist it?” he says.

“We don’t want to be like the taxi guys that came before us. We embrace the future. Then what you’re left with is optimistic leadership. Uber is in a place where we can be optimistic leaders in helping through that transition.”

While Kalanick stresses that self-driving cars and robotic waiters are still a decade or two away, he believes they are inevitable.

“I’m not much of a futurist, but when you start looking at what people are working on in robotics it ultimately goes to some place like that.

“I keep coming back to the same thing, OK what’s the transition? What are the new things we do? We have 150 years of history of when a new technology comes out, there’s a new thing for people to do.