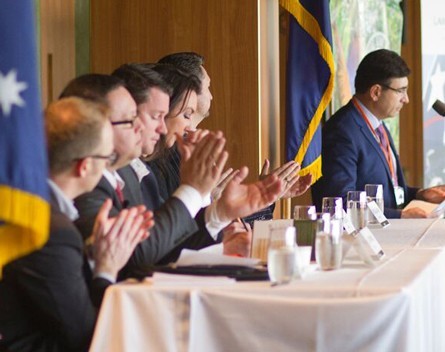 With startups and innovation policy currently at the forefront of Australian politics, it’s important investors and traditional industries are also brought into the conversation, Unstoppables co-founder Julio De Laffitte says.

What De Laffitte calls “the Malcolm Turnbull effect”, is very positive for the country, he says, but the government needs to ensure collaboration going into the future.

“This is only one side of the coin,” De Laffitte says.

“We need to get the VCs and the people with money to also understand the conversation around technology and innovation. Quite frankly at the moment they don’t have to and they don’t.

“We see it all over the news now and there are a lot of conversations about startups and racing to the future.  I’m a believer that the more we talk about it, the better the frame of the conversation.”

Bringing people together in Parliament

Fostering this collaborative environment was the main purpose behind an Unstoppables innovation event at the NSW Parliament earlier this week.

The summit, hosted by NSW Innovation Minister Victor Dominello, saw about 120 business leaders from multiple sectors, as well as entrepreneurs, come together to try to find different ways for Australia to become the “innovation hub of the Southern Hemisphere”.

Actually having this conversation with the various industries is usually the hardest step, De Laffitte says.

“I am an entrepreneur and I’m always looking at how to get to the future first and creating a business around that,” he says.

“How to get to the future first is the exciting bit, having the conversation is the tough part.

“When we got to Parliament, we say this is an amazing place that lets us bring the amazing people together, and speak of the startups and the strength of the conversation from a political perspective.

“We have to get the guys that are in banking and financing, that have the money, to become hungry for this kind of risk. If you put them together in the proper way, then Australia really will flourish.”

It’s important that startups are no longer seen as risky and unstable propositions, he says.

“They think that startups are too risky, and that’s a myth,” De Laffitte says.

“We got people from different industries and we put them on tables and had a dialogue about where they believe they are, what they believe the disruption is and if we are to be leaders in that industry in five years from now, how it will look.

“The purpose of those functions is to truly improve the conversations from all aspects, with the enhancement of current businesses and the creation of new ones.”

According to De Laffitte, it’s these entrepreneurs that will soon be leading the way in Australia.

“This is the time when entrepreneurs will lead. It’s been in the water for a while,” he says.

“Right now everything is being disrupted, even government itself.”

“Politicians naturally are not entrepreneurial, they are the guys who manifest the systems – schools, roads, hospitals police – we need to have, but by nature because they hold the systems, they can’t be the entrepreneurs.”

“We now have support at state and federal level in Australia. I fully expect the government to open up more and listen to entrepreneurial people,” he says.

“The entrepreneurs will lead and the government will have to catch up.”