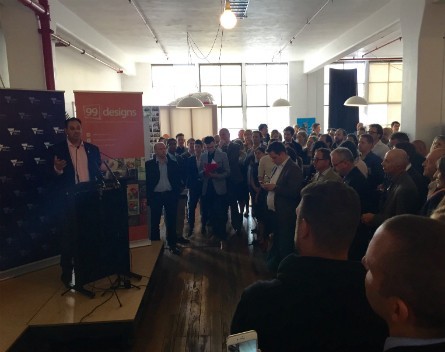 A new representative body for Victorian startups has been established, using the state government’s $60 million innovation fund to make it the “location of choice for startups worldwide”.

These are the first announced details of the innovation fund since it was included as part of the state government’s budget this year, and the money will go towards investing in core infrastructure, facilitating access to further capital for startups, advocating on federal legislation and regulations, startup events and mentoring programs.

New body LaunchVic will represent the needs of the local startup community and aim to “accelerate startups, drive new ideas and create jobs”.

He says he has worked closely with graphic design startup 99designs and the wider community on LaunchVic’s branding, identity and core function.

“We want Victoria to be the location of choice for startups worldwide, and LaunchVic will make it happen,” Dalidakis says.

“The recent moves to Victoria from the leading tech companies show that it’s within our grasp.”

LaunchVic will be led by Pradeep Philip, a former secretary of the Victorian Department of Health and Human Services, who will be backed by an advisory board of “industry experts”.

“We want to work with existing organisations in the startup ecosystem to collaborate and build together a successful startup sector that will help boost jobs, grow private investment and exports and further strengthen Victoria’s economy,” Philip says.

The establishment of an independent authority to support startups was first announced by the state Labor party as a pre-election promise last year, and was solidified with the $60 million innovation fund in this year’s budget in May.

But progress stalled until this latest announcement.

Before this, the state government’s focus has been on attracting big tech players to Melbourne and helping other established companies to expand in order to create jobs.

On Wednesday it was announced the government will be assisting homegrown startup success story Appster amplify its presence and add another 100 tech jobs in the process.

The Victorian government has also worked with big international startups, with Zendesk, GoPro and Slack all announcing their regional headquarters will be in Melbourne.

According to the government, well over 300 jobs will be created from these moves, but LaunchVic is about helping new startups get off the ground and supporting the local ecosystem as a whole.

“This is about encouraging young companies and ideas to create jobs and industries that will support our state for decades to come,” Dalidakis says.