Funding, Growth, How I Did It, Legal 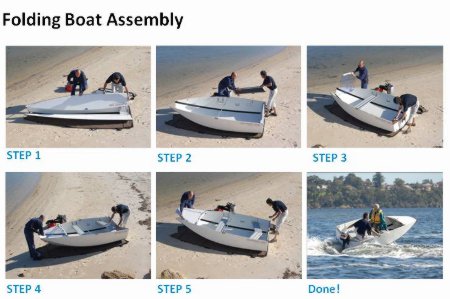 Western Australian company Quickboats has smashed its target on crowdfunding website Indiegogo.com, having already raised more than $1 million this year, as it seeks to go global with its high-tech folding boat.

Quickboats has designed a folding boat that can be assembled in less than 60 seconds. A folding boat would also eliminate the need for boat storage, trailers and deflatables.

Earlier this year, Quickboats raised $1.1 million to launch the company, with a plan to deliver the first fleet of boats by August or September next year.

The company has also found success on Indiegogo, an international crowdfunding website based in San Francisco, which has hosted more than 100,000 funding campaigns.

Unlike its rival Kickstarter, Indiegogo is open to people worldwide. It relies on social media and the word-of-mouth “gogo factor” to entice early adopters to back innovations.

Just 26 hours after launching its campaign on Indiegogo, Quickboats surpassed its $20,000 target. Most backers have chosen the premium option, buying a boat outright for $2,999.

“We set out to raise $20,000 to complete the regulatory approval to expand the market for our high-tech folding Quickboats into the US and Europe,” managing director Deryck Graham says.

“What is even more astounding is that so far people have chosen to buy the top option of $3,000 boats outright even more so than $79 options to purchase.”

“This is a new realm for crowdsourcing sites where the average spend is $50 to $100. We’re delighted with the tremendous buy-in from Indiegogo supporters from all around the world.”

“The buzz generated by the campaign, along with the 3,000 enquiries received to date, has created an overwhelmingly strong foundation for the boat’s successful release.”

As stated earlier, the company’s success on Indiegogo is a crucial step in the delivery of boats ahead of plans to enter markets including Europe, the United States, Canada and Asia.

Weighing less than 40 kilograms, the boat can be folded and flat-packed, allowing it to be transported by hand, via vehicle roof racks or inside motor homes.

It can then be stored by simply hanging it on a garage wall. According to Graham, the Quickboat is “the ultimate in cool and convenience”.

“It can be powered by petrol or electric motor, can take up to four people and with eight horsepower cruises at 20 knots,” he says.

“It is ideal for fishing, recreation or even use by emergency response services… At the end of your day on the water, you can then just hang it on your wall.”