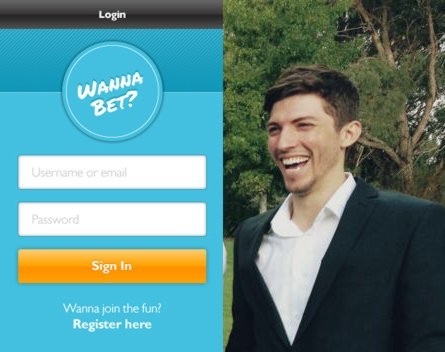 WannaBet, an app mates can use to bet each other through, has won Sydney Startup Weekend.

Lead designer Matt Casey told StartupSmart the app enables friends to bet each other alcohol on the outcome of games, races or anything else they choose.

“Instead of going down to the TAB or wherever else you might bet, this is a mate to mate system, so you can bet your mate who will win. And we’ve all got that mate who just doesn’t pay up ever, but the app means once the outcome is decided, the order is automatically processed,” Casey says.

Casey says their focus on the weekend was around testing the feasibility of the idea, and working out how to approach potential partner alcohol suppliers.

“Some of the guys on the weekend were having chats with Dan Murphy’s and another big supplier, and they seemed relatively on board with going in and having future chats about that, which is always a good sign,” he says.

Casey says the rest of the team explored the best environment the app could work in and pivoted from a venue specific model such as competitions per pubs to a mate-to-mate option.

“When we were exploring the feasibility of it, we tried to take it to pubs to see where the best environment to launch this is, or whether we should just launch it globally on a mate-to-mate basis,” Casey says, adding they went for the option that allowed people to have fun with their existing connections.

Casey says there are lots of aspects of the idea they still need to explore, but they’re hoping to have the app launched by the end of the year.

“We’ll need to get back together with the entire crew but the way we left, things were all really positive and heading in the right direction,” Casey says. “We don’t have a timeline, but we want to get something up in the next couple of months.”