WeWork would be welcome in Sydney, say other co-working sites 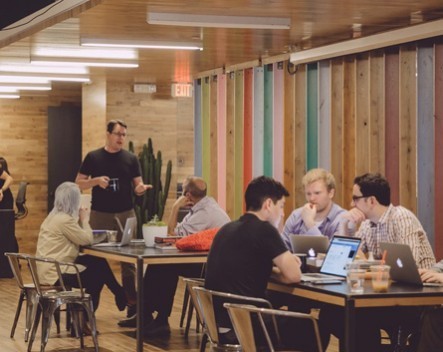 The Australian startup community is welcoming news that global co-working giant WeWork may soon be setting up shop in Sydney.

The collaborative workspace company is worth more than $US10 billion ($14 billion) and has 29 locations in 10 cities around the world.

It now seems that it has set its sights on the harbour city.

A real estate source told the Australian Financial Review earlier this week that WeWork has been on the hunt for a premise in Sydney.

In a statement to StartupSmart, a WeWork spokesperson neither confirmed, nor denied a Sydney launch.

“WeWork does not have information to share about expansion plans in Australia at this time,” the spokesperson says.

The likely arrival of a giant global player speaks to the growing strength of Australia’s startup community according to Murray Hurps, the co-founder of Sydney co-working space Fishburners.

“It’s incredibly flattering to see them here,” he says.

“Sydney couldn’t hope to have supported them five years ago, so it’s really a testament to the advances we’ve made.

“It was pretty much inevitable. There are over 100 co-working spaces around Australia, and demand has never been higher.”

“It’s great to see one of the global players endorsing our local ecosystem,” Cooper says.

“I welcome their investment in the market.”

But Cooper says he isn’t concerned about any possible threat to iCentral from WeWork, saying they offer a very different service to entrepreneurs.

“We do curated community and they do co-working. They do desks, we do professional peer learning,” he says.

“We are highly curated and WeWork is not, so people just won’t get the same community quality vibe.

As opposed to many co-working spaces in Australia which focus solely on tech startups, WeWork opens its doors to entrepreneurs, freelancers, startups and small businesses.

“It’ll be interesting to see their take on what to target in Australia,” Hurps says.

“Startups here are extremely price conscious, and if they’re trying to fill a very large space quickly they’ll need to diversify their target market a lot.”

“They’re targeted at generic small business and large firms that want to get a sniff of innovation and be close to people they sell to,” he says.

“Fishburners’ only competition is anything that takes Australian talent and resources and applies them to anything other than startups,” he says.

“I do feel their expansion will be redirecting that demand from local spaces to their space, rather than increasing total demand.

“I can’t help feeling though those spaces with fewer resources than Fishburners could be badly affected by the new competition.

“Lots of incredible people have worked incredibly hard to build these spaces, and the startup industry will be badly impacted if something happens to them.”