What this entrepreneur learnt from going to her first ever hackathon 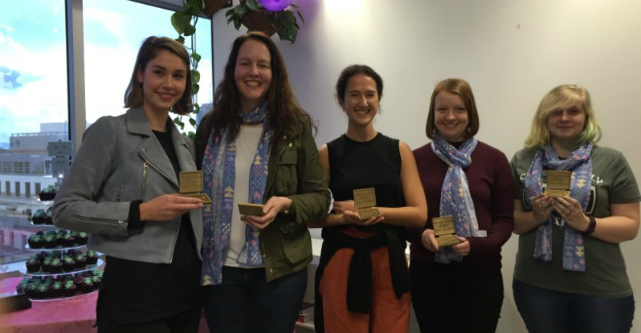 Arriving early at General Assembly on Sunday, I was excited yet curious to explore and see SheHacks in action.

All of the teams were working hard in their groups, making last minute tweaks and finessing their pitches. No sign or remnants of beer and pizza but fresh fruit, popcorn, cupcakes and a range of teas and beautiful tea cups.

SheHacks is an all-female hackathon now in its third year.

Kicking off on Friday night, seven teams of women spent time getting to know other women doing amazing things with technology and working together to bring something new to life. Run by Girl Geek Academy, Sarah Moran and team did a fantastic job bringing this successful weekend together.

I love their really impressive goal of teaching 1 million girl geeks to build technology and create startups by 2025.

As I explored the space, I spent some time contemplating April Staine’s 3D printer, with the product of her work all around us – gotta love the 3D-printed trophies.

As guests for the afternoon pitch event arrived, I was most intrigued to see a number of young girls arriving to learn, share and be inspired. One year 7 student was also captivated by the 3D printer, speaking enthusiastically about her experience using 3D printers at her school and creating her own designs.

It was speaking with another Year 10 student that really got me thinking.

Last year she was the only girl in a programming class of 20 at her school. This year there are only three in total in the class, again the only girl. I ask why her friends don’t want to do programming with her. Because “it’s boring” they say.

Only 12% of engineers are women.

It’s certainly been a big week for some of the Girl Geek Academy Team and Code Club Australia. Breaking a new world record with project Moonhack: the most number of kids coding at once – 10,207 kids in fact.

Back to the hackathon, it’s time to take the judging seats along with the lovely Samantha Wong, Eloise Watson and Bonnie Tran to enjoy the pitches.

Overall I was super impressed by the group of amazing women (who Sarah fondly refers to as the “Mad Hackers!”) with such a strong sense of sharing, support and community coming through in all of the pitches.

We had a tough job deliberating, and finally agreed on the three winners:

Hackolades: A place where creative coders can share their work, in a collaborative and supportive environment that also celebrates great work.

She Counts: A network and community that facilitates the transition for women in tech returning to work after having children, by upskilling and supporting mothers.

Sticks & Stones: An app for primary school children through to pre-teens for learning the impact language has on others, education on the use of language and encouraging young girls.

I’m still buzzing and feeling inspired by this amazing event.

I returned home in the evening and sat down for dinner with my two young daughters. I shared with them what I had learned and told them all of my stories from the day.

They were excited to hear that even at pre-school age they can participate and are keen to get involved. Bring on the next Moonhack, my two little Mad Hackers are there.