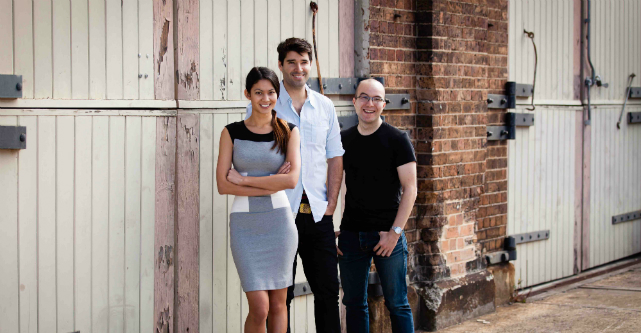 When Canva’s entire team gathered together on Tuesday night, co-founder Cameron Adams felt like he was launching the whole company again.

With just hours until the startup’s iPhone app would be live, Adams says it’s a huge moment for the burgeoning Sydney-based tech company, and another milestone on its planned journey to world design domination.

“We had a get together [on Tuesday night] with all of the team and the vibe of it felt a lot like the original launch three years ago.”

More than a year of hard work

The release of the new app, which aims to let users create “beautiful” designs in just seconds, has been more than 18 months of hard work, Adams says.

“We’ve been working on it full steam for more than a year,” he says.

“It’s been quite a journey. We’ve iterated a lot and tried out a bunch of things. It’s no easy feat to take what we have on desktop and reduce it down to something that works on mobile.”

The Canva team were eventually forced to virtually design the app from scratch after initially aiming to replicate the company’s iPad app.

“We thought we could just take the iPad code and import it straight to the iPhone but we ended up coding an entirely separate app,” Adams says.

“It’s exciting not just because it’s quite a different product – it’s not just the website put onto the phone – but it’s a new opportunity for consumers to dive into Canva as well.”

Through the app, Canva users are able to access professionally design and fully customisable templates along with more than a million stock pictures. Users can also take their own picture with the text already overlaid.

Canva now employs more than 100 people and has raised more than $27 million in funding,

Adams says the company now has 14 million users, and the app launch is another important step on the road to becoming the biggest design company in the world.

“Our vision is to be an entirely cross-platform design tool and to enable the world to do design,” he says.

“We want to be the best design tool across a wide variety of markets. We’ve nailed down on social media and started going into work and business. We’re going to see what this does and what markets it opens up then use that to nail down on other verticals.

“Here in Australia we’ve done business and enterprise tech really well and we have quite a few big companies in that segment, but we’ve never really had a breakthrough mobile piece of technology.

“That’s something we’ve tried to tackle and it’s an important part of our vision.”

The importance of having a vision

The entrepreneur says that having a large vision like this helps to provide the motivation needed to run a startup on a day-to-day basis.

“Stick to your vision and know what you’re aiming for,” Adams says.

“Don’t put out something that you’re not happy with but don’t take too much time to build something either.

“It’s a fine balance between being happy and being embarrassed, and you have to know the right time to launch something.”

While the app launch was a significant moment in the Canva story, he says things are still just getting started.

“From my experience with launch days you have a very climatic feeling but it’s just the beginning of the journey,” Adams says.

“The hard work is going from there and building it up and growing it.

“That’s what we’ve done over the past three years and that’s the hardest and most rewarding part of it.”