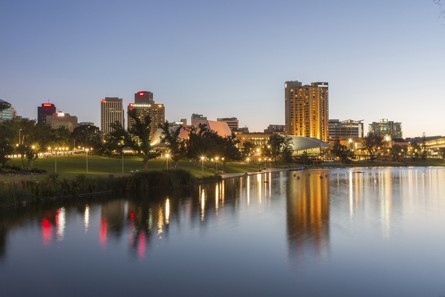 The efforts to create a national fintech association have so far largely occurred as a result of fintech organisations from Sydney and Fintech Melbourne.

But while the majority of fintech startups are based within these two cities, it’s easy to forget that many interesting and successful startup companies have been launched in cities around Australia.

Atlassian for instance, is Australia’s biggest recent startup success and was launched in Brisbane.

As the formation of the national fintech association continues to gather pace, it will be important to remember the rapidly growing communities outside of Sydney and Melbourne.

With the end of the mining boom Australia is seeking other industries to fuel growth, it’s a golden opportunity.

So it was with excitement that I was invited by Luke Howes from the Adelaide Fintech Meetup to speak at their recent event which was held at the office of Fusion within the Adelaide city centre.

Having never been to Adelaide before, I worked from their main co-working space Majoran which is run by Chhai Thach, who also runs a fintech payments company called PayHero.  I found this quite surprising because it’s generally quite rare to randomly meet another fintech founder.

The coincidences continued though at the Adelaide Fintech Meetup.  After sharing our own story about how we built the fintech community in Melbourne, I was surprised at the number of quality early and later stage fintech startups I encountered.

Beginning with Joust, I listened to their pitch on their developing mortgage selection product, which would help consumers get a better deal. Along with more developed financial services companies like MyBudget, I had conversations with credit unions and representatives from the local Adelaide and Bendigo Bank.

Perhaps it was the feeling that media coverage had made it seem that fintech was focused in Melbourne and Sydney which is causing the Adelaide community to want to go hard on fintech.

While numerically there were not as many attendees as with meetups in Sydney and Melbourne, there was a tangible buzz and excitement for fintech.

As the discussions around fintech in Australia heat up in 2016, it’s important to remember that the national community is much more than just Sydney and Melbourne.

Andrew Lai is the founder of FinancialAsk which runs ASK Crowe Horwath.  He founded Fintech Melbourne which he runs alongside Alan Tsen, Sahand Bagheri and Derric Wong