Why the sharing economy needs a democratic revolution 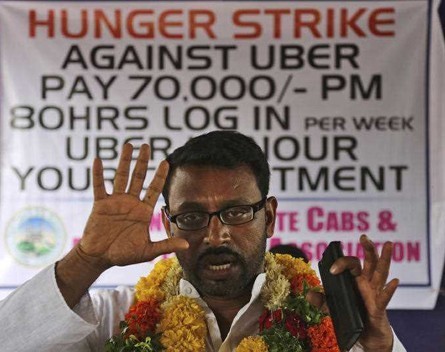 The rapidly growing influence of Silicon Valley owners over sharing economy platforms is a troubling development. The growing strength and pervasiveness of these platforms means their owners have significant power to impose their visions of what it means to be a citizen or worker in cities across the globe.

Airbnb, for example, seems free to distort property prices and create a grey, unregulated market for short-term accommodation. Uber meanwhile continues to erode hard won labour rights and turns a blind eye to acts of discrimination committed by its drivers.

One way to combat this could be a sharing economy which is less concerned with making money, and more focused on creating social and environmental value. A proposed solution is to create a more democratic sharing economy. In other words, a sharing economy where the corporate owners are held accountable by the wider public, and users and workers govern platforms together.

But democratising the sharing economy is no mean feat. Research I’ve conducted with colleagues at the Open University and the University of Leeds shows how platforms can work. But they also face the challenge of maintaining their democratic nature and not becoming centralised and more commerically-driven.

For-profit democratic sharing economy platforms are very few and far between (we couldn’t identify any successful examples). So we turned to the non-profit sector and looked at Freegle, a democratically-governed UK offshoot of the Freecycle Network, in our study.

Freegle is a grassroots organisation which runs an online platform, very similar to Freecycle, which helps keep unwanted items out of landfill. The platform enables people to freely and directly give unwanted items such as furniture and electronics to others in their local area. Since being founded in 2009 Freegle has grown rapidly and claims to have approximately 2.3m users across the UK.

Freegle was established by hundreds of volunteers who left the Freecycle network. The volunteers left after a long running dispute with the central Freecycle management over the erosion of Freecycle’s grassroots ethos. So, first and foremost, Freegle provides some promising evidence that democratic sharing economy platforms, at least in the non-profit sector, can emerge from well-established centralised platforms.

Freegle has also been successful in building a community of hundreds of volunteers across the UK who govern the platform. Major decisions about the future of Freegle are discussed in online forums and then voted upon by volunteers. In particular, the development of a financially sustainable business model, aligned with Freegle’s grassroots values, has been the topic of extensive discussion.

Within the community, volunteers provide each other with a great deal of mutual support and share their knowledge. Discussing issues such as how to increase the number of people using the network, and whether or not certain items (such as potentially dangerous chemicals and potentially offensive magazines) should be offered on the platform. So, we can also hope that more democratic sharing platforms would create opportunities for users to learn from each other and develop new social relationships.

There are some downsides to running a democratic platform, however. The most prominent being that Freegle’s democratic model has made growing the network even more challenging than it might otherwise have been. Lengthy decision-making processes, based on discussion and voting, have meant that opportunities to expand have been missed.

It also means that financial backers geared toward supporting more streamlined for-profit companies have been deterred from investing by the complexity of Freegle’s structure. These issues suggest that efforts to create a more democratic sharing economy may face considerable resistance; in particular from actors with a more commercial focus.

Perhaps more worryingly, in the six years since Freegle was founded there is strong evidence that democratic participation has fallen. This seems tied to the enthusiasm of Freegle volunteers ebbing away. In turn, decision-making has become more centralised.

Finding a solution to this is extremely important if we want to make sure that these platforms are accountable to the people they promise to serve and not just those governing (or profiting from) them. And if we want to see the sharing economy live up to its promise of helping us transition to a more sustainable and equal economy.

So does the promise of a more democratic sharing economy outweigh the peril? For me it does. Silicon Valley platform owners are likely to disagree, as democratic governance would erode their profit margins. So, it will be left to citizens, social movement organisations and governments to promote greater democracy. As our research into Freegle shows, however, these efforts should be informed by the knowledge that democratic organisations face challenges and external pressures which corporations do not.

Chris Martin is Research Fellow at The Open University