With wine! Because no great story ever started with salad 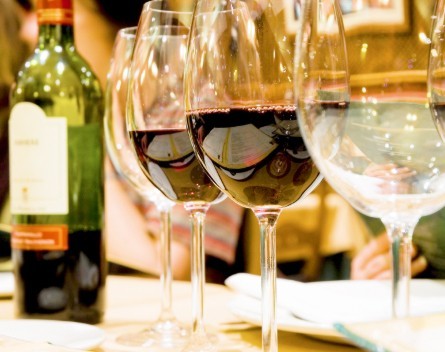 At least he thought he didn’t. It was the moment he discovered he loved wine that he first thought of the concept for his startup withwine, an app that helps its users recommend, buy and remember wines they like.

Three years ago, Owens was at a dinner party with his parents and a friend of theirs, when his host poured him a glass of wine, refusing to stop pouring despite his protests.

“I literally said ‘no no no no, please I don’t drink wine’, I knew it was expensive and I didn’t want to waste it on me,” Owens says.

“He just kept pouring and said ‘that’s because you drink shit wine’.”

Not wanting to be impolite Owens took a sip and enjoyed it, and from there, he hasn’t looked back.

“I get so much enjoyment out of drinking wine now and it took me 12 years to realise it,” he says.

Now 33-year-old Owens is working on his BlueChilli-backed startup, he hopes to help people find wines they love.

“The problem is people are open to trying wine, but they’re not getting the guidance, or they’re getting guidance from people who don’t know,” he says.

“People want to spend money on wine, but it isn’t easy to do. You have to remember what the wine is called, go and find the wine on either the internet or bottle shop.”

Owens’ solution was to create an app which allows users to purchase a bottle of wine on the spot, direct from wineries, and recommend wines to their friends.

It’s no secret that Australians love wine, so it’s unsurprising that wine-related startups in Australia are popular too.

Withwine is banking on its social aspect differentiating itself from other startups like From The Producer and Winecloud.com.au, which also allow wineries to sell their products direct to consumers, or Vinomofo which offers consumers deals on wine.

Currently, he’s working on the app acting specifically as a companion piece of technology for people taking wine tours on the Hunter Valley, but sees the potential of building a catalogue large enough so as it could be used in restaurants and dinner parties around Australia.

“With a consumer-facing mobile app, that lets them keep track of their tastings, share with their friends the wines that they like, easily and seamlessly buy on the spot from the app in the moment,” he says.

“Basically we’re shortening that period between the decision and wanting the wine to the act of purchasing it.”

Owens says the app is still in development and he’s working to formalise relationships with wineries. He’s aiming to launch withwine in the early part of next year.