Would you pay to cuddle someone? Meet the growing number of hugging-based businesses 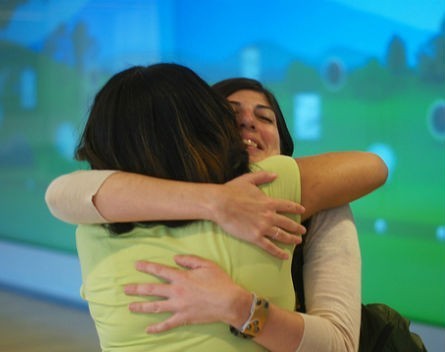 Matchmakers and hook-up apps beware: friendly cuddles from strangers could be the next big thing.

Cuddle Up To Me, a new service based in Portland in the United States, allows people to pay for cuddles.

Samantha Hess, who founded the business in 2013, describes herself as a professional hugger and told Fox News the business recently “has taken off” with as many as 10,000 emails in one week.

“I was at a place where I thought paying someone to hug me and not have ulterior motives sounded like a great idea,” she said.

“I decided why can’t this be a thing that we can easily and safely reach out for?”

Hess says a one-hour cuddling session costs $US60 ($69.59) and has hired additional staff to keep up with demand. She stresses that the business is not adult-oriented in any way.

“We can customise each session depending on your comfort level,” she told Fox News. “I have some people who will come in, and we won’t touch at all. We’ll just sit and read together.”

Cuddle Up To Me’s website is currently offline, with the business writing on their Facebook page that it had crashed due to “hundreds of thousands of simultaneous web requests”. In recent days the business’s social media pages have been flooded with messages of support.

“I absolutely love what you are doing with your business,” one person wrote. “Sharing and spreading the love and kindness that everybody needs and deserves. You are amazing.”

Other people pointed out that they would love the opportunity to use the service themselves.

“I love this idea,” said another commenter. “You have no idea how many times I’ve been upset and just having someone to hold onto would have made the difference.”

Cuddle Up To Me is not the only service to capitalise on the desire to be held and comforted by other people. In September, the app Cuddlr launched worldwide. According to its website, Cuddlr is a “location-based social-meeting app for cuddling”.

Dean Serroni, founder of Melbourne-based social network startup Vent,, started his business as a way for people to come together, complain and support one another online. He says there is a lot of potential in the Australian market for businesses that cater for people wanting to connect with each other on a meaningful level in today’s fast-paced, digital society.

“There’s an emerging generation of people who are looking for more out of social media,” Serroni told SmartCompany.

“There’s a growing need for sites that cater for people who want to connect with each other on a deeper, more emotional level – whether it be to provide support or to share problems in a way that make people feel they are not alone in their situation.”

Serroni says he has seen a lot of his company’s users interact with one other with “hugs in written text”. As a result, Vent will soon introduce a feature that will allow people to “hug” a status rather than simply “like” it when the situation is sensitive or a like may simply not be appropriate.

“We are working hard to embrace this and introduce features into our product that will allow people to interact in a much more natural way, and to feel better for it,” he says.

PrivateMedia contacted Cuddle Up To Me but did not receive a response prior to publication.