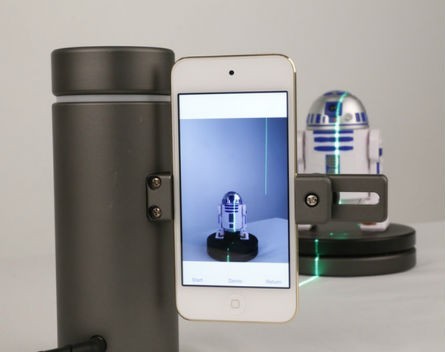 When the Eora 3D Kickstarter campaign launch was nine minutes late, the team were immediately contacted by at least 25 loyal fans worried about the brief delay.

It was then that co-founder Rich Boers knew it was going to be a success.

Demand for the Sydney-based startup’s smartphone-powered 3D scanner crowdfunding campaign was immediate. It reached half of its $80,000 goal in just ten minutes, and hit the target after only three hours.

It’s a testament to the demand and excitement the cheap and simple 3D scanner has ignited in the 3D printing community worldwide, and the buzz it is beginning to generate in the media.

Operated through a free smartphone app, the scanner can capture an everyday object or surface, from an R2D2 figurine to a coffee cup, and turn it into a high quality 3D model to be printed, and it’s just like taking a video on your iPhone.

Boers, along with co-founders Rahul Koduri and Asfand Khan, came up with the idea after being slugged with a $20,000 bill for a 3D scan. They thought there must be a cheaper solution, and found it in something that we’ve all got in our pockets.

Despite the original $80,000 goal, Boers said the team always had ambitious hopes for the crowdfunding campaign.

The only downside of a significantly oversubscribed crowdfunding campaign is the pressure it places on manufacturing and distribution, but Boers says the Eora 3D is more than prepared for this increased interest.

“We don’t see any issues with going over the goal,” he says.

“We know we can manufacture them and fulfil the orders, and we’ve been changing the company to take it to a much stronger position.

“We want to just keep the momentum and do everything we can to provide the product.”

The campaign includes a range of different price tiers for the scanner, with the early bird special of $199 already selling out. There’s also a $229 early adopter special, and a $319 Kickstarter special. It’s vastly cheaper to the alternatives, Boers says, with a scanner that provides the same level of accuracy costing up to $15,000.

The dedicated community of 3D printing buffs was what convinced the team to turn to Kickstarter rather than seek a traditional investment round, Boers says.

“The reason we went to Kickstarter initially was because the people who understand the need for a 3D scanner and the people who are going to be early adopters are those who already own a 3D printer,” he says.

“Kickstarter has a very, very active community in the 3D printing space and has had a lot of very successful 3D printing campaigns. It was a natural fit to start the business.”

Transparency the key to Kickstarter success

The secret to a successful Kickstarter campaign is to be completely transparent about the product and its testing, Boers says.

It was taking the time to ensure these tests were up to scratch that helped the startup surpass its crowdfunding expectations, he says.

“We could have launched it three months ago but I don’t think we would’ve been successful like we are now,” Boers says.

“We didn’t want to launch prematurely – we’ve been working on it for a little over a year and showing it publicly for eight months.”

Off the back of winning the Sydney Seedstars competition earlier this year, the Eora 3D team will be travelling to Switzerland at the start of 2016 to compete in the global version of the event.

The co-founders have also recently travelled to the World Maker Faire in New York, which was the “culmination” of all marketing efforts to date.

Immediately after the crowdfunding campaign comes to a conclusion at the end of the month, Boers’ two fellow co-founders will be jetting off to China to meet with manufacturers and prepare the assembly line to deliver to the backers.

As the Kickstarter campaign reaches new heights with each day, now is the time to rapidly expand the company around the world, Boers says.

“We’re trying to capitalise on it and get our story heard,” he says.

“Lots of people go to Kickstarter without having everything lined up. One thing we’re hearing from our backers is that 3D scanners usually aren’t transparent with the results. We have live scan videos, and we let people download samples of the scans to check the quality and detail.

“No other 3D scanner can do that today, and we’re being as transparent as possible.”