You Chews forced to change name after cease and desist letter: Why it was the “best thing that could have happened” for the Sydney startup 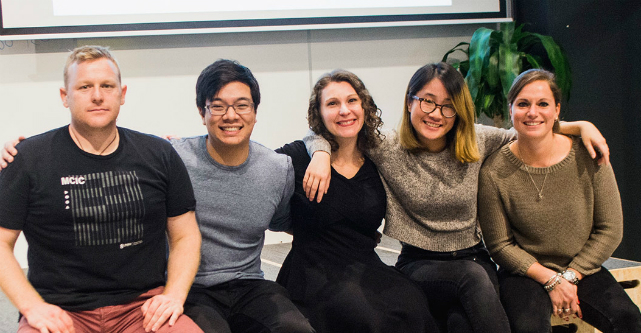 You Chews has been forced to change its name after receiving a cease and desist letter earlier this year, with the Sydney startup now going by the name Caitre’d.

But founder Liz Kaelin says this was the “best thing that ever happened” for her startup.

Kaelin was sent a cease and desist letter in April from another business with a similar name using “two very common words put together”.

After the initial shock, the founder says she resolved to use this to her advantage.

“I did some detective work and made the decision that this isn’t going to be the end,” Kaelin tells StartupSmart.

“I decided I wasn’t going to fight it or get angry.

“I said, ‘this is something we’ll have to get over, I don’t know how but we’re going to make it happen’.”

More than just a name change

After consulting with a lawyer, she was given some pointed advice: “Just change your name”.

And instead of just coming up with the name, Kaelin resolved to use this as an opportunity to tackle some of the broader issues that You Chews was facing.

“They said to take it as an opportunity to change the business completely,” she says.

“You have to weigh up your customers and reputation, and if you’re early-stage you’re better off doing something completely different.

“It was an awesome opportunity to improve the business. We thought, ‘what would we do if we were building a competition?’ We took everything we’d learnt and used it as if we were competing with ourselves.”

This process led the small startup team to shift the company’s focus onto the users.

“That one little change – from we to your – has made such a difference,” Kaelin says.

“It forced us to take a step back and think about why it wasn’t working. It wasn’t customer-focused enough. It’s not about us, it’s entirely about them.

“It changed the entire culture of the company.”

Across a three-week process, the team talked extensively with users about why they were on the You Chews platform. It was when one customer referred to You Chews as being “like a maitre’d” that Kaelin had a lightbulb moment.

After swapping a letter to focus on the startup’s catering offering, Caitre’d was created. And it comes with added security from any further challenges.

“The benefit of the new name is we’ve actually created it, so it’s much easier to protect,” Kaelin says.

With a new name and newfound purpose, she says Caitre’d is like a whole new business.

“When I started You Chews I literally had no idea what I was doing. I made a lot of mistakes on that journey and this is the 2.0 version.

“Something so cataclysmic and potentially really damaging and negative can actually be the best thing that ever happened.”

And none of it would be possible without the dedicated Caitre’d team, she says.

“It’s been really chaotic, messy and stressful and they’ve handled it like pros,” Kaelin says.

With the centred focus on customer service, she says she isn’t concerned about a loss of brand recognition, even after a high-profile appearance on Shark Tank under the old name.

“I don’t think we’ll have any problems with brand recognition provided we’re doing what we say we will,” she says.

For other founders and entrepreneurs facing a similar make-or-break situation, she says it’s crucial to face the reality and persevere.

“You have to accept the situation and take responsibility,” Kaelin says.

“The first thing I did was call the woman that sent me the letter and apologise to her. I said there’s clearly an issue and I didn’t do my due diligence properly. That reframed the entire situation.

“Our whole business is about people and I’m trying to instill that culture into all the things we do.”

When faced the potentially business-ending letter, Kaelin says she made an active decision to give her all to helping the startup survive.

“I knew that You Chews wasn’t exactly right for a really long time but I didn’t know why. Rather than saying, “I’m not going to do this’, I said that we had to keep going.

“I’m not going to give up and stop because we didn’t hit some metric or because we got a cease and desist letter.

“You have to push through until something happens. If I failed then I was actually okay – I knew there was nothing more I could have done.”

With the shiny new name and business focus, the startup’s attention now turns to rapid growth.

“We’re taking a page from the playbook of Google or Apple,” Kaelin says.

“We’re not focusing on advertising at all but on getting our products shit-hot.

“We’re pretty good but how can we make it really, really great? That’s what we want to do in the next six months.”