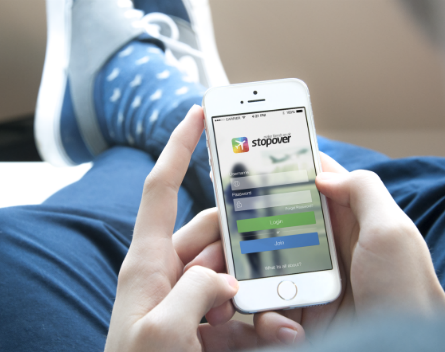 A young Australian entrepreneur is looking to revolutionise the airport experience with a social media app that has caught the eye of Richard Branson and Steve Wozniak.

Amber Blumanis, founder of Stopover, took out a Talent Unleashed award yesterday in the rising star category for the Asia-Pacific region. The competition’s judges included world-renowned entrepreneurs Richard Branson, the founder of the Virgin Group, and Steve Wozniak, co-founder of Apple.

“It’s an airport meet-up app,” she says. “You can create a profile before you get to the airport and if you have time to kill you can see who’s nearby and meet up with people to grab a coffee, learn another language or anything you’re interested in.”

Blumanis says the idea came to her because she has done her fair share of travelling. While at Charles de Gaulle Airport in Paris she wanted to find somebody to practise her French, but didn’t have any practical way of doing so.

“I’ve had so many long, boring stopovers,” says Blumanis. “I saw a need for it – I wanted it really.”

The 24-year-old says she was still coming to terms with winning the award and being recognised by industry heavyweights.

“I’m still in shock,” she says. “I couldn’t believe Richard Branson and Steve Wozniak had heard of my app.”

After coming up with the idea, Blumanis found an Indian-based development team on Freelancer.com – a crowdsourcing marketplace for small businesses. After the app took off, she went to India to meet them and invited the chief executive of the development company to become a co-founder of Stopover.

Blumanis says she had always wanted to start her own business so she could work on her own terms.

“I love travelling and wanted to create a job where I could do it anywhere in the world,” she says.

“IT provides that opportunity, which is great.”

Blumanis says her advice to fellow entrepreneurs is to get out there and do as much research as possible.

“Just do it and don’t feel overwhelmed when you’re starting out,” she says. “Get online, read things and find a mentor if you have one in the field you’re interested in getting involved in.”

Blumanis has also just launched her own app development company called Teks Mobile Australia, which she says will focus on offering quality products for competitive prices.