Sadhana Smiles: “I have had to think and act like a white woman” 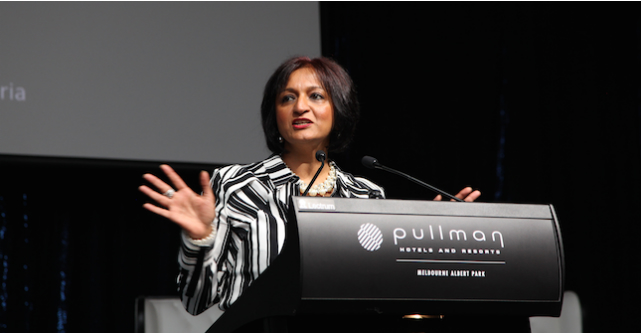 Sadhana Smiles is one of just two female CEOs in her sector in Victoria. But she wonders if she would have gotten there if she’d worn a sari or a hijab. At the launch of the Women’s Agenda Ambition Report on Thursday, she called for workplaces to think about diversity as meaning much more than gender. Below, she shares more on the topic.

This is not another opinion piece about diversity in the workplace. Not as you know it anyway.

You would have to be living under a rock in Australia not to know that gender diversity in Australia’s leadership and the gender pay gap (with the full time total remuneration gap currently sitting at 23.1%, according to Australia’s Workplace Gender Equality Agency) is a hot button in the corporate world.

The media attention this issue has enjoyed and the debates it has triggered are great.

I speak regularly on the subject as a female CEO in a male dominated industry and am passionate about seeing change. I do this from my unique position as one of only two female CEOs in my industry in the country and, because of this position, I get the ears of men often. Men are a key part of this discourse, in fact, without men parity will be impossible.

I am also in the unique position of being a migrant, female leader, (Indian and Fijian born) of which there are even fewer in corporate Australia to lend a voice.

This is the all-encompassing definition of diversity I want to address: are our workplaces and its leaders a reflection of our communities?

As the ever-important diversity conversation gains momentum, my fear is that the picture of corporate leadership; white, male, 50 years +, is changing to white female which is not the only picture we need to be painting here.

Diversity is actually about people. Australia is a melting pot of races, cultures and ability, and the experience of each of these people is different, yet we talk about diversity from only one point of view.

As Australia’s immigration rates continue to increase and we open our doors to more of the diversity the world has to offer, we need to be able to welcome and encourage these employees in their careers. Employees want to know their leaders understand them and empathise with them.

As a woman of colour, I can tell you that my experiences will likely differ from the leader sitting next to me.

We talk about targets and quotas for the number of women on ASX boards or at directorship level, yet where is the conversation on the diversity of our businesses as a whole?

Who is holding HR and recruitment teams accountable on what the colours of an organisation look like?

Are you, as a leader, discussing the diversity of your organisation with your management team and asking what you need to do to change the status quo to embrace diversity in its entirety?

Perhaps review your leadership or management team cohort on its diversity.

Embracing diversity is a better way to do business

Embracing diversity allows businesses to better connect with their consumers and their communities. This will result in a more relatable or credible brand.

Embracing diversity paves the way for a new leadership

Diverse leaders bring new stories, new visions, new ideas and new empathy to a workplace. Embracing diversity now sets the example for the visionaries coming up through the school system who are looking to business and its leaders today to set their own goals or create their own boundaries for the future.

We’re slow to change. Nobody likes change. Over the last two International Women’s Days that have brought significant awareness to the issue of the gender pay gap, we have seen no movement in its disparity. People prefer the status quo because they know the outcomes.

So, what is the answer then? I believe it comes down to CEOs and managing directors having the courage to proactively seek change. Start with looking around your office, do you see diversity? The all-encompassing definition of diversity including, men, women, cultural diversity, representatives of the disabled and/or LGBT communities.

If not, talk to your HR and/or hiring team, are you getting diverse resumes? If not, why? If yes, then are they being eliminated through unconscious bias?

As an ethnic woman in business I have had to be very aware of assimilating into a predominant white work force.

I have had to think and act like a white woman, and I have had to work much harder at being accepted. My glass ceiling has always been double glazed, I first had to break through my cultural glass ceiling and then the corporate one.

As a woman, I cherish the conversation Australia is having about gender diversity in the workplace and in corporate leadership.

However, in paying Peter, let’s not rob Paul – diversity is the issue here. Gender diversity is a component of that.

Let’s not forget, or worse ignore, the voice of the migrant female, disabled or gay employee who’s questioning how collective the word diversity is as we know it today.