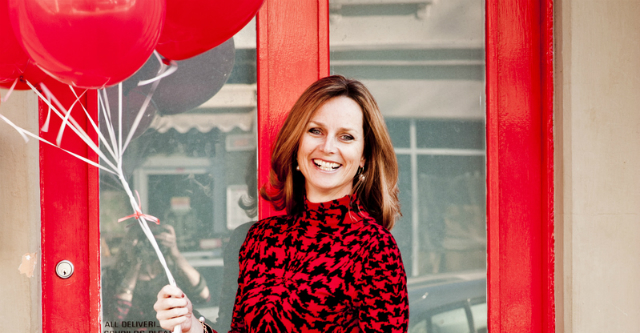 A co-working community with spaces in Melbourne, Sydney and Brisbane has welcomed Naomi Simson as its entrepreneur-in-residence after the roof literally caved in on the Shark Tank judge’s latest venture.

Speaking to StartupSmart, Simson says she and her team at Redii discovered Gravity Coworking after they were forced to flee their normal office when flooding caused the roof to collapse.

Redii, which evolved out of Simson’s e-commerce business RedBalloon, is an employee rewards platform for small business owners and entrepreneurs and has about 12 people on the team.

“It was a calamity was the first reason, it was not strategic,” says Simson.

“In small business, you’re metaphorically always wondering when the roof is going to fall in.”

But the calamity ended in a pleasant surprise with Simson discovering not only a new place to accommodate her growing Redii family, but a whole community of small businesses and startups.

“It’s nice to hang out with people who use our application,” she says.

“It’s actually quite cost-effective … it serves me on a bunch of levels.”

As entrepreneur-in-residence, Simson will be a regular face at Gravity’s “Lunch and Learn sessions”. The first one was held in Melbourne this month.

In a blog post, Gravity founder Jacqui Esdaile said the events will work like open forums for co-working members to discover how Simson has “navigated starting up and running businesses, the challenges she has faced and what she believes the keys to success are”.

Simson believes she will also gain great value from these sessions.

“Hearing it first hand and being able to ask questions and vice versa creates a sense of belonging,” she says.

Read more: How Naomi Simson got her first customer and grew RedBalloon from a struggling startup to a booming business

Simson says co-working spaces can be a valuable place for fast-growing businesses and startups to operate as they scale from a team of two to four, to 10, and beyond.

“Home is often not a productive place to start,” she says.

However, Simson notes that ventures do need to be generating revenue and serving customers to afford co-working rental fees.

She says she wouldn’t have entered a co-working space for at least six months if such hubs were around when she launched RedBalloon but with Redii, it’s ideal.

“Small commercial space is really hard to find and if you don’t know how fast you’re going to grow and you get locked in to a two- or three-year lease, it can be a real burden for a small business,” she says.