Zombie technology: From Palm to Yahoo, the companies that refuse to die 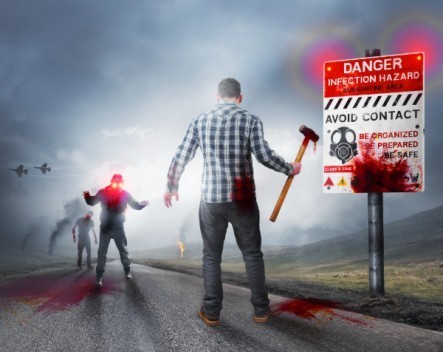 When technology, and the companies behind it, fails, the end can come in a number of different ways.

A technology can be mercifully put down, as with Google’s failed hardware media player, the Nexus Q. Alternatively, a failing company can be bought and shut down, as in the case of the once famous personal digital assistant maker Palm, who were bought, and then shut down by HP.

Failing companies can also enter a more indeterminate, zombie state where the company may still earn enough money to stay open, but the company itself, and the products they produce, will never again be a significant force in the technology landscape.

Recognising zombie companies and technology is relatively easy. Companies with a languishing share price that shareholders are clearly only holding onto because they hope the company will be bought, is one clear indicator. Blackberry’s shares for example, popped 30% on the rumour that Samsung was about to buy the beleagured mobile phone company. The shares crashed back to their original value after the company denied the reports. Twitter and Yahoo also both benefited from the suggestion by ex CEO Ross Levinsohn that they should merge.

The fact that the market should respond to these types of rumours are clear signs that the companies have exhausted the option of developing their own products to continue making them relevant or competing against the market leaders.

Discussions about the death of a company or technology

Another indicator of a zombie company are the number of discussions that occur about whether the company/technology is actually dead or whether it will see a resurrection. This is being played out right now after Google’s announcement that its much maligned smart glasses were being pulled from public sale. Commentators are divided as to whether this signifies the complete death of the product or merely a pause before some form of re-launch. Google Glass has become a zombie product because even if it does survive, it will never have anything other than marginal interest.

In another case, reviews of BlackBerry’s latest phone, the Passport have tried to imply that this will somehow reverse its fortunes. Others propose growth for the company through services rather than hardware.

The key thing for zombie companies however is not to confuse the ability to stay in business with the fact that the business is actually viable. In the UK in 2013 for example, there were approximately 160,000 companies that were capable of staying afloat because they could pay the interest on their loans but had no way of ever being able to pay back the actual loans themselves.

Companies like Twitter for example, who are as yet to make a profit from anything other than the selling of their shares, can keep going on their IPO proceeds and by convincing people to invest further on the basis that they will eventually make money. The interesting thing with Twitter is that there is the belief that it can still make money somehow, with the right management. There are increasing calls for the CEO Dick Costolo to resign even though it may simply be that there is no viable way for Twitter to make enough money from its social network.

Massive Open Online Courses (MOOCs) for example, were going to transform the higher education sector by offering high-quality, free, online courses to the world. Companies like Coursera are still going only because of the large amounts of money that they have raised from venture capitalists. Unfortunately, the higher education industry proved resilient to change and Coursera’s attempts to make money out of ongoing professional education is never going to realise the ambitions of their investors. The same outcome is true for other MOOC companies like Udacity and edX.

Another topical zombie technology are crypto-currencies like Bitcoin. Bitcoin’s 80% fall in value since its peak in the past year has cemented its general failure to gain acceptance by governments, the financial sector and the public at large. This doesn’t mean the end of Bitcoin as there will be fringe uses for this technology supported by a core group of loyal fans. Its zombie state however will continue to be confused with a technology simply waiting for the right market opportunity to become the basis for the world’s future digital economy.

Zombie companies present a real problem in that they lock in funds, and employees who could otherwise be working more productively within their own startups or other companies.

Of course, eventually companies will stop trading, or be bought for their remaining assets, but that time may be surprisingly far into the future.