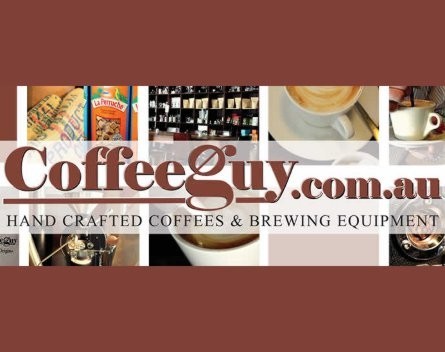 A small business which has been trading as Coffee Guy since 2006 is now struggling against the might of the Retail Food Group and its introduction of The Coffee Guy brand to Australia.

But there was already a small business in Australia with this name.

Daniel Salter owns the boutique coffee store and roaster Coffee Guy in Brisbane, and started trading under the name Coffee Guy in 2006.

He operates an espresso bar in Brisbane but also wholesales to cafes across the state and retails his roasted coffee nationally through his online store Coffeeguy.com.au.

“I had been Coffee Guy Pty Ltd down in Sydney previously with another partner in 2000, so I couldn’t use that name initially but then I registered the business name in 2009,” Salter told SmartCompany.

“I went to an intellectual property solicitor in 2008 to find out if I could trademark Coffee Guy and was told that because it was too generic and no different to something like ‘the postman’ it was too difficult to register as a trademark.”

Salter says he was also approached in 2008 by The Coffee Guy Group from New Zealand about purchasing Coffee Guy the brand in Australia.

“That fell down because there was not enough money on the table,” he says.

Salter then watched The Coffee Guy Group in New Zealand go from strength to strength.

The first inkling Salter had of RFG’s interest in the Coffee Guy was when Gary Alford, the director of franchise at RFG talked to him about purchasing his business.

“When I heard of RFG purchasing The Coffee Guy Group in New Zealand I rang Gary Alford to enquire what their intentions were for the business in Australia, he came and met with me and asked for Coffee Guy’s financials and all the details of the business,” Salter says.

Salter engaged a business broker and says because of personal circumstances he was quite happy to sell.

“I put forward a reasonable price and asked RFG to come back to me and it didn’t,” he says.

Salter did not hear anything further until seeing the launch of The Coffee Guy vans across Australia.

“As a small business you feel there is not much you can do against a big business like that,” Salter says.

“We have a stylish boutique feel and that is compromised by having all these vans driving around with branding on – it minimises my opportunities to sell my coffee to cafes and businesses because they have these vans parking out the front in competition.”

“I don’t know what to do next as I did everything I thought I needed to do to protect myself,” he says.

Salter approached the Australian Securities and Investment Commission and was told it was not the regulator’s problem and that he had to follow it up through lawyers privately.

“I feel that it is pretty hard going when I have established the business and it is a national business,” he says.

“So far in legal fees it has cost me in excess of $10,000 just to get advice on taking it to court, and it prevents me from trading beyond my area and building, the wholesale side of the business and retail online.”

SmartCompany contacted RFG for comment but did not receive a response prior to publication.