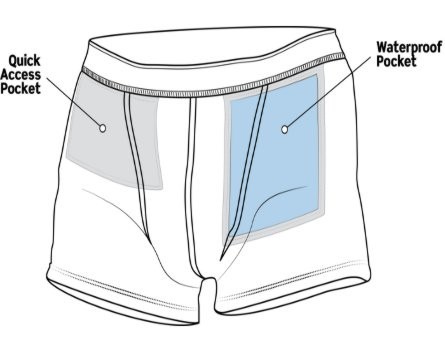 After fellow backpackers kept asking to store their valuables in his custom-made pocketed undies while travelling in Brazil, Nigel Clifford realised his holiday innovation may just be a business idea.

He’s launched a Kickstarter campaign to raise $30,000 to fund a first run of his “Adventure Underwear” range: Pairs of merino wool men’s briefs with two hidden pockets beneath the waistband, one of which is waterproof to 60 metres.

Clifford told StartupSmart the idea was born when he began planning a trip to Brazil in 2010.

“I had a friend warn me about pickpocketing and getting held up, and they said it was a shame because girls can just hide things in their bras, but men didn’t have that option. I immediately thought – why the hell not?” Clifford says.

While he made the first prototype for his trip simply for security, the trip validated the idea.

“I didn’t plan on making a product out of it, but people were especially interested at the beach when you couldn’t leave your stuff behind or it’d be nicked in a heartbeat. I realised people would really value it and started exploring the idea,” Clifford says. “It also doubles up for those annoyingly dorky money belt things that we all really hate.”

A chemist by trade, Clifford says learning about the industries he was about to enter in under a year has been challenging.

“Learning the whole underwear and textile industry from scratch for a start has been hard,” Clifford says, adding that they tried several suppliers in Australia and the United States before opting for a Chinese provider because of the high textile quality.

The plan is to start selling the products in Australia and the United States via the company website, but also begin approaching outdoor wear stores too. Clifford says they’re also exploring a range for women.

Clifford is driving the awareness and marketing campaign through the Australian and American blogospheres.

“I got in contact with a whole bunch of different travel bloggers over the last few months. We gave them advanced prototypes so we could hit up our exact demographic. About 16 of them have already written up reviews, with six to go,” Clifford says.

Clifford is working with a US-based business partner and if the campaign is successful they’ll be able to order their first run of over 1000 pairs, with half going to each country.