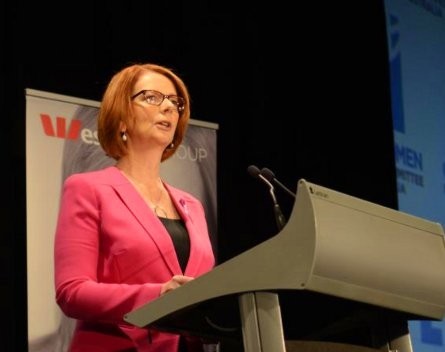 However, some advocates and economists have warned the announcement may have a detrimental impact, with Gillard warning that new taxes may be imposed in order to pay for new spending on disability insurance and education.

Finance Minister Penny Wong told the ABC this morning the government is considering a wide range of options, and did not deny the possibility of a levy to fund the National Disability Insurance Scheme.

While economists say the deficit is not an economic problem, as Australia’s credit rating is secure, the impact on confidence could impact businesses.

“Until we get confirmation about what measures are put in play, that will be a concern. We’ve seen some improvement in confidence, and further cuts to tax concessions could have a detrimental impact.”

Gillard said yesterday the budget will be affected by a drastic fall in revenue of about $12 billion. The Australian Financial Review has reported this will translate into a deficit of between $16 billion and $17 billion.

Gillard also said yesterday the shortfall would mean putting “every reasonable option on the table” in order to plug the gap, “even options previously off the table”.

While the government has not targeted any specific areas, previous speculation had pinpointed self-managed superannuation and high-income earners as potential sources of revenue.

Peter Strong, the chief executive of the Council of Small Businesses of Australia, told SmartCompany this morning the government should consider financing SMEs in order to boost medium-term growth.

“We need to have better targeted funds for businesses that are identified as growing quickly,” he says, also adding the government should consider taxing purchases made overseas in order to raise GST revenue.

However, Strong says the size of the deficit isn’t necessarily an issue for small businesses, per se.

“At the micro-level, we look for solutions. What this suggests to me is that we need to get our micro-economics right.”

Savanth Sebastian agrees the size of the deficit isn’t necessarily a large problem, especially as it has shrunk since last year, but points out the impact on confidence such a big budget gap could have.

“We’ve seen some improvement in confidence, and that translates to business confidence,” he says.

“Further cuts to tax concessions and revenue can have a detrimental impact on that early boost to confidence.”

Sebastian also says the deficit means the Reserve Bank is in a position to ease interest rates even further.

However, not every business group is so pleased. The Australian Chamber of Commerce and Industry released a harsh response to yesterday’s announcement.

Head of economics and workplace relations Greg Evans said the latest writedown “puts the onus on the government to properly deal with spending”.

“Business is indicating that a major cause of uncertainty is the inability for the government to get its fiscal house in order and to set out a pathway back to surplus.”

“This has become our number one economic priority as without a sustainable budget there is no scope for the major economic reforms required such as delivering a tax system that promotes incentive and enables productivity improvements.”