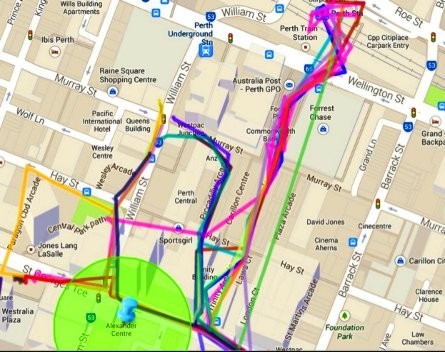 Chris Baudia hopes his victory at the recent Appcenter Global Hackathon in South Korea will help spur investment in his Perth-based startup, GeoMoby.

Baudia and his team took out first prize at the event, which featured 500 startups founder Dave McClure as a judge, with an app based on GeoMoby’s technology called Social Fence.

Using that technology Baudia’s winning app, Social Fence, enables the community to report incidents, such as a train station closure. This creates a “social fence” and other users approaching the station are notified that it’s closed.

Social Fence then helps link users with each other through a chat group where possible solutions, such as sharing cabs, can be discussed.

Baudia was one of four members of the Perth co-working space Spacecubed who travelled to Seoul to take part in the event.

He told Private Media he has been disappointed about how difficult it’s been for GeoMoby to raise capital.

“We’re based in Perth and it’s probably not the right place for a tech startup, but we’re trying to demonstrate the opposite,’’ he says.

“The community is absolutely fantastic, but access to the right people has been tricky for us, we’ve received a lot of support but we’re still struggling to get capital to grow.

“We tick all the boxes, we’ve got a provisional patent [and] our first revenues; we’ve got some traction.

“We’re getting new users every week. It’s not a series A, or series B, just a seed raising.”

Recently, GeoMoby signed a partnership with US mobile app marketplace Buzztouch giving it access to more than 250,000 app developers.

“We’re not the smart guys, we just build the technology and it’s up to our customers to build stuff on top of that,’’ Baudia says with a laugh.

He says the company might have to look overseas for investment, possibly in China, Korea, or Silicon Valley.

“We’re still in Peth and we want to believe we can raise capital here,” he says.