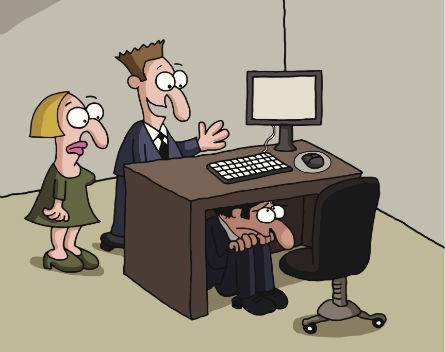 An office for introverts: When workplaces started adopting open plan offices in the 1960s, it was hoped scrapping employee cubicles would foster collaboration and make teams more efficient. But as Olga Khazan writes in The Atlantic, sharing your work space with others can be traumatic, especially for the introverts among us.

Enter author Susan Cain and office furniture maker Steelcase, who together have created the introvert’s dream: small rooms, decked out with desks, couches and even yoga mats. And the kicker: the rooms are completely soundproof.

“These are spaces where people can innovate … Solitude is a crucial ingredient in innovation”.

Was Mark Zuckerberg the kiss of death for Eric Cantor? US politics is awash with reports on the implications of the defeat of House Majority leader Eric Cantor at the hands of Tea Party challenger Dave Brat in the race for the Republican presidential nomination. But is his apparently close relationship with the founder of Facebook to blame for his loss?

“It should go without saying that suspicion of Silicon Valley civic-mindedness is not limited to the Tea Party right. But Cantor’s defeat may mark the most prominent political deployment of the tech-mogul-as-villain to date. And it bears watching. Because Cantor is hardly alone in Republican leadership circles cosying up to Silicon Valley.”

Leonard continues: “American populists on both the left and the right distrust close linkages between politicians and big business. Dave Brat’s victory is a signal that that distrust is electorally meaningful”.

Weird corporate Twitter: In The New Inquiry, Kate Losse charts the rise of #weirdtwitter and the growing instance of high-profile corporations such as Denny’s restaurants adopting “casual, playful and sometimes intimate” voices on Twitter in perfectly timed and on-meme tweets. Once the domain of anonymous teen bloggers, the blurring of lines between individuals sharing their wry observations of society and corporations selling their products makes Losse uncomfortable.

“A few years ago these distinctions were clear — only an imaginary teen on social media could tease us via text with his rapidly mutating tastes and emotions, while corporations still tried in stiff earnest to get us to buy whatever they were selling.”

“But slowly, and by 2014, very quickly, the insouciant, lower-case voice became the mainstream, corporate voice. Now, a Denny’s tweet can sound more casual and on meme than any individual’s Twitter account. And it isn’t just Denny’s: Brands from Chipotle to Hamburger Helper have gained massive followings this way. If in the past five years we all had to grow up somewhat … how is it that corporations grew down, becoming the new meme-aware “teens” of social media?”

But it’s not an even playing field, says Losse.

“But if the conceit of #weirdtwitter is that any average person in America can remake themselves as a pseudonymous #weirdtwitter comedian, corporations joining the fray have an outsize advantage, because they are neither anonymous nor average nor even a person. When corporations tweet something “weird” and “funny” to us, we pay more attention: The thought of a traditional corporate entity, which has historically had no direct “voice,” suddenly distilling itself into an eccentric, devil-may-care character is instantly affecting, precisely because of how uncanny, even creepy, it is.”