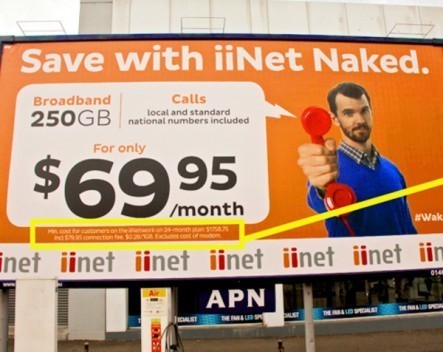 Australia’s second-largest DSL internet provider has been hit with more than $200,000 in penalties for recent advertisements that the competition watchdog believes contravened Australian Consumer Law.

The Australian Competition and Consumer Commission handed out two infringement notices in relation to iiNet’s recent advertisements for its Naked Broadband 250GB plan.

The ads appeared on billboards and trams in metropolitan Melbourne in November last year, displaying a monthly price of $69.95.

While the total minimum price was included in the advertisements, the ACCC decided they were not displayed in a “prominent way”.

ACCC chairman Rod Sims said in a statement the consumer watchdog did not think iiNet displayed the total minimum price in its advertising appropriately, as required under Australian Consumer Law.

“Consumers must be able to understand the true cost of an advertised product so that they can make informed purchasing decisions,” he said.

“Businesses must ensure that when they advertise part of the price of a good or service, the total minimum price is also prominently displayed.”

Sims said the total minimum price must be easily seen and grab the attention of the customer.

The penalty follows the announcement of iiNet’s partnership with Netflix, which will see customers of the internet provider have un-metered access to the US-based streaming service’s television shows and films.

A spokesperson for iiNet says the company was surprised by the decision and does not agree with the infringment notices.

“We have strived to meet the equal prominence test but given there is no clear definition of that test, ISPs are finding it hard to avoid being fined nowadays,” the spokesperson says.

“iiNet has paid the fine despite being disappointed that these matters can’t be worked through between the ACCC and the industry without formal enforcement measures being taken.”

The internet service provider is not the only company to be stung due to representations deemed potentially misleading or false by the competition watchdog.

Last year Telstra paid a $102,000 infringement notice due to an iPhone 6 advertisement which the ACCC argued did not give enough prominence to the total price consumers would have to pay.