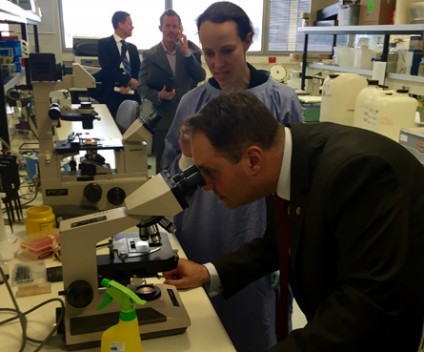 Two early-stage Victorian startups have received more than $4 million in funding each to ensure their potential revolutionary medical technologies remain in Australia, as a $200 million fund works to “fill the gap” between IP and commercialisation.

The VC fund was launched with the aim of ensuring Australia’s medical technologies can be commercialised in Australia instead of being lost offshore.

Aravax, a startup pioneering peanut allergy research, will be getting a $4.15 million cash injection, while Cardiora, which is testing a new drug to treat patients with heart failure, will be getting $4.85 million.

“This has been a failing of the Australian innovation landscape,” Nave says.

“The government spends so much on research every year and that in turn supports the creation of these new medical innovations. But until now there’s been nothing to help take it from the laboratory and develop it commercially.

“Our role is to fill this gap.”

Brandon Capital announced the huge new fund earlier this year, with $50 million of it to be deployed as seed funding for very early-stage startups across a two-year period.

The cash injections for Aravax and Cardiora will help them establish a startup around the technology, Nave says.

“Part of our role is we get in from the very beginning,” he says.

After this program, the surviving medtech startups will then have access to the remaining $150 million in funding for clinical trials of the technologies.

Victorian minister for small business, innovation and trade Phillip Dalidakis says this is another big boost for the state’s startup ecosystem.

“I’m thrilled that two Victorian startup companies with ground-breaking research projects were chosen as the recipients for this major investment,” Dalidakis says.

“This is a significant vote of confidence for Victoria’s medtech sector.

Both startups will be undertaking research projects at Melbourne’s Alfred Hospital thanks to the investments.

The benefits are wide-ranging if local VC funds continue to invest in this brand of startup, Victoria minister for health Jill Hennessy adds.

“By working together, we will continue to grow Victoria’s pre-eminence in medtech and ultimately that means better health outcomes for Victorians.”

It’s important that more venture capital is made available to these young medtech startups, Nave says.

“If our country is serious about trying to create future jobs, this is one of those sectors we have to think about backing,” he says.

“In healthcare and biotech, every technology that is successful is life-changing for patients.”