Cold emailing investors can be done with some success 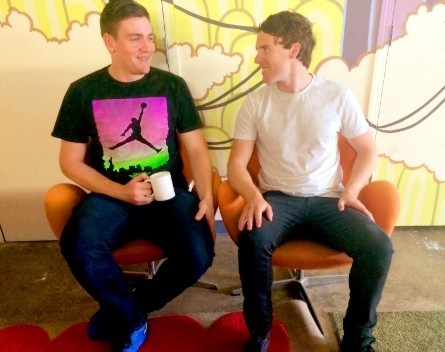 The best piece of advice Moodswing co-founder Jake McKeon has heard since he arrived in San Francisco with AngelCube on their tour of the San Francisco and New York is perhaps the simplest: “You’re never going to raise money from the US, unless you’re here.”

“The brutal truth is there are just too many good opportunities locally, so investors are not going to look anywhere else,” McKeon says.

With plans to register his company in the US and relocate, McKeon and his co-founder Chris Long have not been wasting any time in building up connections.

When their demo day failed to give them the intro the San Francisco market they were hoping for, they decided it was up to them to reach out and make themselves known to local investors. They’ve had some success, which McKeon puts down to his methodic approach.

“I did a lot of research and found similar business to us, and then I used Crunchbase and AngelList to find out who invested in them,” McKeon says.

“I then got in touch with the investor at those funds who led the rounds, using rapportive and a lot of creative googling to find their emails.”

So far McKeon and Long have three meetings set up with relevant investors as a result of the approach and expect to eventually get around five or six. Of those who declined a meeting a few have sent back constructive feedback, including a partner at Google Ventures.

“Warm emails are best, you get about 100% reply to those, but with cold emails we’ve had about 20% success,” McKeon says.

He says he keeps his email short and to the point, focusing on retention and engagement the company has had to date. He also mentions the investments that the investor has made and lets them know how he can be reached. Once he gets a positive response he send them his pitch desk.

It helps that Moodswing’s stats are impressive enough to get some cut through.

“Our users spend on average about 20 minutes a day across six sessions on Moodswing,” McKeon says.

You need to understand that traction is an important factor in the Valley, says McKeon.

“We spoke to 10 to 15 investors in Australia last year and not one of them asked me about retention,” McKeon says.

McKeon and Long, who have been working on their startup since January 2013 say the AngelCube program was what made them realize that they had to measure the daily activity of their users. They had, up to that point, been riding on the fact that their initial app had 100,000 downloads in just three months.

“Before AngelCube, we had no idea what we needed to measure or even how to measure it,” McKeon says.

McKeon says if he knew what he did now he would have approached things differently.

“You’re dealing with busy people so setting up a meeting with short notice is difficult,” he says.

“If I had to do it again I would have found 10 people I wanted to target and focused on emailing them before I got here, pretending that I was here already.”

Bronwen Clune is in San Francisco as a guest of Angel Cube.