Diversity in the workplace: Don’t hire clones of yourself 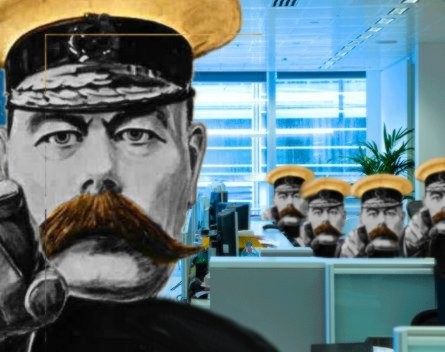 Dare, if you will, to imagine this nightmare scenario.

Widgets are flying through the air like footballs. Every other conversation begins with the phrase “Back in my day, Sonny Jim Crockett”.

There are no favourite vicuñacino buddies. Instead, an army of humble correspondents march off at lunchtime to a cheap cafe where cold coffee is sipped on tacky ‘70s furniture downstairs from the offices of a hated business rival, named Snoqualmire.

Banners with the phrase “business is war!” adorn the corridors, alongside pictures of Jack Tramiel and Scrooge McDuck. Hand drawn. On butchers paper. You save costs that way!

You might find an Old John Deere combine harvester in the middle of the floor, but sofas are treated as unneeded expenses. An Old Reliable Rank Arena flickers in the corner, while a newer Samsung tellie still lies disconnected on the floor. The cable is too short.

Every conversation happens in the third person. At the end of any business meeting, after much complaint, a chorus of 100 Taskmasters simultaneously bellow “get it done – today!”

And heaven help us if a winery is ever late with a shipment of brandy!

Why, an office full of Taskmasters would be a nightmare! No-one would ever get anything done! You just couldn’t run a company like that!

Many entrepreneurs try to hire people like themselves. There’s a myth that an office of people similar in temperament and character will get along together. In reality, what you get is an army of clones.

This means you might end up with an office full of passive aggressive sooks who haven’t spoken to each other in years because of a petty disagreement about where to go for lunch. Productivity is non-existent.

Next door, there might be an office full of staff sharing the same violent temper. They’re so busy yelling at one another, or picking the pieces of shattered coffee mugs and broken office chairs off the floor afterwards, that nothing gets done!

Down the road is the office full of perfectionists. Nothing is ever perfect – so no product ever ships!

When everyone is alike, the worst personality traits are amplified. The stupid traits are encouraged. The obvious facts are overlooked after being checked by a dozen sets of eyes.

On a large scale, you get Steve Ballmer’s Microsoft!

What can you do about it? Make sure you have diversity in your workplace.

That means diversity across gender, ethnic, religious and age lines. Don’t be afraid to have people with different personalities and temperaments.

If you’re presented with two equally qualified and suitable candidates, take the risk on the one that is less like you. That way, you won’t be stuck with a nightmarish monoculture!

As a chorus of Taskmasters would say, get it done – today!