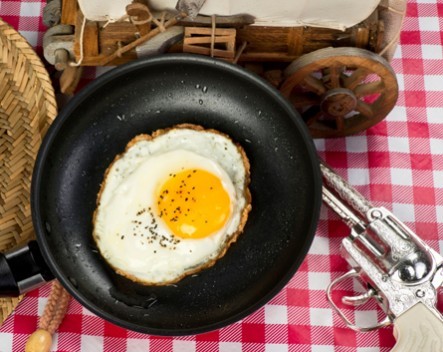 Government officials and an egg lobby group have teamed up to try to scramble a Silicon Valley food startup that offers a plant-based egg alternative.

The Guardian has obtained 600 pages of emails that saw a US department of agriculture official, staff from the American Egg Board and egg industry executives collaborating to try to fry Hampton Creek.

The tech company has raised US$120 million to date, and poses an egg-sistential threat to the $5.5 billion per year egg industry.

Hampton Creek sells a low-cost plant-based replacement for eggs, as well as a mayo replacement to boot.

In the emails, the officials advise a group in how to proceed with a false advertising lawsuit filed against the startup, brainstorm tactics to force the company to change its name and ask Whole Foods to block the products.

The emails even include joke threats of violence against the Hampton Creek founder, with one official asking: “Can we pool our money and put a hit on him?”

Hampton Creek founder Josh Tetrick is understandably a bit upset about the authorities having a laugh about sending a hitman out to get him.

“I’m not entirely surprised that some industries that are lost in the past a little bit are fighting so hard,” Tetrick told the Guardian.

“Even though it was joking, some of those notes about putting a hit out – that’s some reckless stuff.”