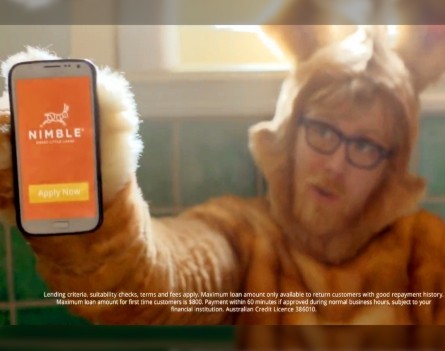 Payday lender Nimble is reportedly in the process of pulling an ad promoting its loans as a means to pay utility bills, after it was accused of misleading consumers and exploiting people in financial hardship.

Nimble is the latest payday lender to face scrutiny for its advertising, after Paid International was last year fined $30,600 by the Australian Securities and Investment Commission over ads found to have misled customer about the time it took to process loans.

The Nimble television commercial shows a man taking a shower when his hot water is suddenly cut off.  He is then encouraged by Nimble’s rabbit mascot to use a loan to pay for the bill.

The ABC reports the advertisement will be pulled from airwaves but it was still available on YouTube at the time of publication.

Consumer advocacy groups have accused Nimble of misleading customers about their options when facing financial hardship.

Gerard Brody, chief executive of the Consumer Law Centre Victoria, told SmartCompany utility companies are legally required to offer hardship payment options to customers, which would be at a significantly lower cost to a consumer than that of a loan obtained through a payday lender.

“The ad suggested customers should get a Nimble payday loan to cover financial hardship and we think that is pretty irresponsible,” says Brody.

“No one needs to get a payday loan.”

Brody says Nimble has “wilfully ignored” including a legal warning about other payment options in the advertisement.

He says Nimble has a second commercial that relates to telephone bills, which is still being broadcast, and the Consumer Law Centre has raised similar complaints about the ad. He says telecommunications companies have similar legal obligations to their customers to provide payment schemes in times of financial hardship.

When asked if the matter could potentially be referred to the Australian Consumer and Competition Commission, Brody said it would be hard to argue Nimble had engaged in misleading conduct.

“But we think it’s irresponsible and against the spirit of the law, even if it’s actually not misleading anyone,” he says.

“A payday lender should not be advertising or offering quick cash to those experiencing financial hardship. There are much better options.”

*Nimble chief executive Sami Malia told SmartCompany Nimble’s advertising is in line with all relevant codes and regulation and was not intended to be taken literally.

“Most people find themselves short of money at one time or another, and our ads are designed to engage people around that generic situation,” says Malia.

“However, following feedback that some people could take one of our ads literally, and despite the fact we advise applicants to speak to their utility provider on our application form, we have decided to cancel the ad around the gas bill and are currently reviewing all our ads.”

He says Nimble’s customers are not “who you would expect”.

“Our customers may not be who you would expect. They are employed, many have incomes over $100,000, and are financially responsible, typically with a perfect credit history,” he says.

Malia noted Nimble does not lend to people who are fully dependent on Centrelink benefits, approves only one in four applicants and “protect[s] our customers with capped fees and revised schedules, so there’s no chance of a long term debt spiral.”