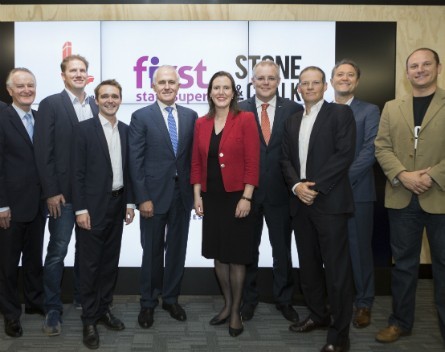 H2 Ventures now has the “deepest pockets” in the fintech sector through a new partnership with a large super fund that’s set to contribute tens of millions into startups in the sector.

First State Super announced the deal with the Sydney-based accelerator at Stone & Chalk on Tuesday at an event attended by high profile politicians including Prime Minister Malcolm Turnbull, Kelly O’Dwyer and Wyatt Roy.

The super fund will be funnelling money into fintech startups chosen by H2 Ventures across the coming years as part of its pledge to contribute $250 million into VC.

It has already put more than $110 million into Blackbird Ventures’ $250 million fund earlier this year.

This new partnership has enormous potential and will allow the accelerator to help startups across their entire lifespan, H2 Ventures co-founder Ben Heap says.

“For both of us it’s about identifying terrific opportunities,” Heap tells StartupSmart.

“This will allow us to invest in the later-stage and follow the best ideas that come through the accelerator as well as other ventures that we see.

“By having this partnership it gives us a much larger capacity to be an investor – now we’re likely to have the deepest pockets.”

One deal at a time

The exact amount First State Super will be contributing hasn’t been revealed, and Heap says it will be dealt with one investment at a time.

“There are a very significant number of increasingly large opportunities so rather than having a dollar number burning a hole in our pocket we want to do it on a case-by-case basis.”

At the event, Turnbull said there has “never been a more exciting time to be in fintech”.

“There is nowhere more in Australia that the ideas boom is underway than here in Stone & Chalk.”

The gradual rise of fintech

Fintech has come into the spotlight in Australia recently, but Heap says it’s the result of years of work behind the scenes.

“We’ve been chipping away at this for a couple of years now,” he says.

“A lot of what’s going on in fintech has been in the work for years.

“This is a step on the path – it’s a marathon not a sprint. This is one of those pleasant days where you feel a real sense that you’re making progress and that the government, the ecosystem and the investors are supporting you.

“But we’re a long way from the finish line.”

For Heap, years of work is finally coming to fruition.

“We feel like the timing is right,” he says.

“Australia needs to see that it can genuinely be a third hub along with London and New York. We can and should be the cornerstone of what’s going on in the region.”