How to get out of a contract 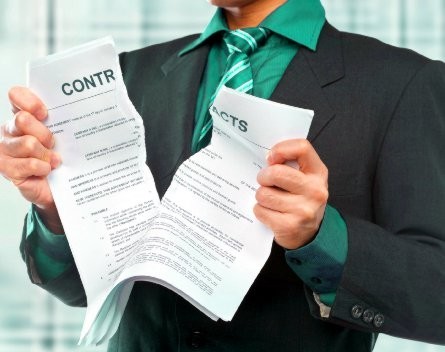 Obviously, you can’t just walk away from a binding legal contract. If you do, you’ll be leaving open the possibility that your counterparty will commence legal proceedings against you. If legal action is taken against you for breach of contract you could be forced to pay for any losses your counterparty has suffered as a result of your breach. This article sets out some common strategies you can use to get out of a legal contract. A good contract lawyer will of course be able to advise you of the best course of action.

A great way to get out of a contract is to comb through it and work out if your counterparty has in fact breached the agreement in a way which would terminate it. More complex contracts will generally set out a range of actions or omissions which will lead to the termination of the contract. A good contract lawyer might be able to pick out one or more trigger events which could lead to a counterparty breach. If you get lucky, and your counterparty has breached the contract in a way which leads to termination under the terms of the contract, you will need a lawyer to advise you on the best way to proceed.

If you entered into the contract based on a fraud or misrepresentation then the contract will usually be invalid. This actually happens very frequently. Salespeople often gild the lily when trying to close a sale. If you’ve signed up to a contract based on untruths and inaccuracies you may very well be able to extricate yourself from the agreement by arguing fraud or misrepresentation.

In certain industries, such as the franchising industry, legislation governs the process of entering into important agreements. The Franchising Code of Conduct, for instance, requires franchisors to offer a cooling-off period, whereby a franchisee can terminate an agreement within seven days of entering into the agreement or making a payment under the agreement. If the franchisor doesn’t provide for this, they will have breached the relevant legislation, and you will be able to extricate yourself from the contract.

Finally, the courts may decide that a contract which is grossly unfair is invalid. Whether this applies will depend on your individual circumstances, and your lawyer will be able to advise on this.

If you want to get out of a contract, don’t despair. There are a number of potential ways to extricate yourself from an unwanted contract. This will take some time and effort, but a good contract lawyer can guide you on all of the above points.